Following a request by the heads of the so-called Donetsk People’s Republic (DNR - Denis Pushilin) and Luhansk People’s Republic (LNR - Leonid Pasechnik) that Russia recognizes them as independent states, President Putin convened an emergency session of the Russian Security Council on 21 February 2022. The meeting was presented as being broadcast “live” (with evidence suggesting it was pre-recorded). All members present publically supported recognition.

President Putin then broadcast an hour long speech to the Russian people supplying a historically legitimized rationale for recognition. In this surreal speech Putin stressed the importance of “ancient Russian lands,” and Novorossiya and stated that “Ukraine was a creation of Russia.” He bemoaned Lenin’s “time-bombs,” the USSR’s collapse and in that process how “Russia was robbed” by a Ukraine with no tradition of statehood. Ukraine, Putin asserted, is “a colony with a puppet regime,” represented by “greedy interests,” oligarchs, corruption and U.S. control. In effect, Putin posited the notion of a ‘Russian Ukraine’ and advanced a doctrine of Russian national imperialism. Putin does not recognize Ukraine can freely exercise choice, that it has its own sense of identity and nationhood: it is an object to be subjugated. This speech reprised and updated his article “On the Historical Unity of Russians and Ukrainians,” 11 July 2021.

An ‘ideological Putin’ mindset was on display. Putin was belligerent, alone, aloof, contemptuous and certain of his own judgement. Judging from the extraordinary meeting earlier, his inner circle appeared as a subservient and intimidated echo chamber. The notion of Putin as primus inter pares is fiction. The speech was a nostalgia-laden, revisionist litany of his unresolved grievances, resentments and phobias. Firmly entrenched in power for two decades, Putin attacks the past, avoids the future, desperately himself seeking the recognition he bestows on Donbas but withholds from Ukraine.

After the speech Putin signed two identical decrees ‘On ratifying the treaty on friendship, cooperation and mutual assistance between the Russian Federation and the DNR’ and ‘the LNR.’ Russian “peacekeepers” were immediately deployed, though it remained unclear whether Russia had recognized LNR and DNR according to the de facto borders of 2022 i.e. 40% of the two oblasts, or according to the de jure administrative borders of 2014. The Russian legislature approved the recognition on 22 February 2022. This recognition violated the 1975 Helsinki Accords, the 8 December 1991 Agreement Establishing the Commonwealth of Independent States, the 21 December 1991 Alma-Ata Declaration, the 1994 Budapest Memorandum, and the 2015 Minsk Accord.

One understanding of Putin’s choice to recognize the statehood of ‘DNR’ and ‘LNR’ is that he seeks to avoid the risk of a major disaster (further escalation of war engages Ukraine’s army and militia directly) and move beyond the stalemated Russian mid-December 2021 security guarantees ultimatum. Several additional benefits can be identified. First, full-scale sanctions are avoided. Second, President Putin has a ‘win’ that is acceptable to and supported by the Russian population, so increasing his popularity. Third, this incremental approach has the best chance of dividing the West. Fourth, pressure on Ukraine is maintained, and the pervasive sense of insecurity ensures that Ukraine loses $3bn a month, so weakening it and its ability to resist Russian influence. Putin may conclude that he can coopt and suborn local elites in certain regions within a weakened Ukraine and so create a Russian Ukraine from within and at low cost. Fifth, the creeping annexation of Belarus can continue apace and sixth, Russia has symbolically underlined its status as a great power.

However, the opposite can also be argued. Recognition is a necessary step to forward stationing of Russian troops, providing the pretext for full restoration of the de jure administrative borders of the two republics. This draws Russia into a wider war with Ukraine. Indeed, the logic of recognition without further escalation suggests a referendum and then annexation. This represents a de facto strategic defeat for Russia: Moscow loses its ability to instrumentalize the Donbas to influence Ukraine’s politics and strategic orientation, even as its remaining soft-power in Ukraine is squandered.

Broadly, five factors support the understanding of recognition as prelude to escalation. First, Putin’s rhetoric strongly suggests that Russia only sees Ukraine in terms of ‘Russian Ukraine’ – not a neutral or non-aligned Ukraine. The same reasoning applies to Belarus. For Putin, Finlandization would apply to Georgia and Moldova, given that he recognizes these nations do not fall within so-called “ancient Russian lands.” Putin seeks to extinguish Ukraine as a politically pluralist democratic polity with a vibrant civil society on Russia’s doorstep, removing a legitimation challenge to a dictatorial and quasi-monarchial Russia. Second, Russia’s mixed messaging around the recognition of de facto or de jure borders of the two oblasts suggests at the very least that Russia wants to keep the prospect of further escalation on the table. Third, the evacuation of the elderly, woman and children from Donbas also enables further escalation. Fourth, Russia is a power player and ‘escalates to dominate’ to achieve its goals: ‘in the absence of carrots, one can only use a stick.’ Fifth, as the Russian invasion of Donbas incurs Western sanctions, Russia may escalate to deter further sanctions. Irrationality and miscalculation dominate in kinetic contexts. Putin appears to have priced in sanctions to his decision-making, though these sanctions will have costs and signal unity and resolve.

The lead indicator for either scenario is how the borders of the states are defined. On 22 February, President Putin subsequently stated: “We recognize the states. That means we recognized all of their fundamental documents, including the constitution, where it is written that their [borders] are the territories at the time the two regions were part of Ukraine.” Kinetic activity has yet to occur, but further escalation is more likely, with Mariupol and Kramatosk in the Donetsk oblast’ the test-cases.

The current crisis underscores a fundamental schism between Russian autocracy and Western democracy and it is orchestrated by President Putin. However, Russia has lost control of the dominant narrative: President Zelensky through words and deeds does not reinforce the Russian discourse regarding Ukraine as ‘genocidal’ and ‘neo-Nazi’ and Zelensky himself as ‘Hitler.’ U.S. intelligence sharing has surprised Russia and may indicate attempts at strategic reflexive control. U.S. and allies have expected and predicted Russian invasion. Putin apparently believes that to be strategically relevant he must be unpredictable; to be unpredictable is not to invade.

China ‘wins’ in any scenario. Russia’s invasion of Ukraine distracts the United Statese from fully focusing on the China challenge. Russia, in confrontation with the West, may be forced gradually to accept junior partner status as its least bad option, while China can maintain its narrative of ‘peaceful coexistence.’ China, however, can perhaps mitigate Russian escalatory confrontation in Ukraine, shaping Russia’s risk calculus. In this sense, Russia’s invasion of Ukraine represents an inflection point in Russia-Chinese relations.

Putin’s ultimate vision may be to navigate the Russian ship-of-empire between three broad currents: 1) the establishment of his own legacy by the ‘regathering of Russian lands’ and restoring Russian ‘imperial greatness’ while suppressing democratic impulses; 2) provide a foreign policy and international environment characterized by managed confrontation but not outright conflict with the West as this allows core sub-institutional actors in Russia to best achieve their competitive goals; and 3) domestically, Putin can further impose a national emergency security regime, which guarantees the 2024 transition of power through to 2036.

Dr. Hannes Adomeit is a Senior Fellow at the Institute for Security Policy at Kiel University (ISPK). He studied political science and international relations at the Freie Universität in Berlin and Columbia University in New York, finishing the former with a Diplom, and the latter with a Certificate of the Russian Institute, an MA, and a Ph.D. “with distinction.” For two decades (1979-1989 and 1997-2007) he was senior research associate at the German Institute for International Politics and Security (SWP), first in Ebenhausen near Munich, then in Berlin. He has also held research positions at the International Institute for Strategic Studies in London, the Rand Corporation in Santa Monica, California, and was a fellow of Harvard University’s Davis Center for Russian and Eurasian Studies. He has taught Russian affairs at the Fletcher School of Law and Diplomacy at Tufts University in Medford near Boston (1989-1997) and at the Warsaw campus of the College of Europe (2007-2014).

Dr. Pavel Baev is a Research Professor at the Peace Research Institute Oslo (PRIO). He is also a Senior Non-Resident Scholar at the Brookings Institution (Washington DC) and a Senior Research Associate with the French International Affairs Institute (IFRI, Paris). Pavel specializes in Russian military reform, Russian conflict management in the Caucasus and Central Asia, energy interests in Russia’s foreign policy, and Russian relations with Europe and NATO.

Dr. Pal Dunay is the academic advisor of the European Security Seminar – East (ESS-E) and the Program on Applied Security Studies (PASS) at the Geroge C. Marsall Center for Security Studies. He also runs seminars for the Senior Executive Seminar (SES), the Seminar on Regional Security (SRS) and the South-east Europe Fourum (SEEF). He has co-edited issues of Per Concordiam (NATO; Strategic Deterrence and Arms Control) and is a member of the editorial board of the quarterly journal, Connections. Prior to joining the Marshall Center, Dr. Dunay was the Director of the Organization for Security and Cooperation in Europe’s Academy in Bishkek, Kyrgyzstan.

Dr. Dmitry Gorenburg is Senior Research Scientist in the Strategy, Policy, Plans, and Programs division of the Center for Naval Analysis, where he has worked since 2000. Dmitry is an associate at the Harvard University Davis Center for Russian and Eurasian Studies and previously served as Executive Director of the American Association of the Advancement of Slavic Studies (AAASS). His research interests include security issues in the former Soviet Union, Russian military reform, Russian foreign policy, and ethnic politics and identity. He currently serves as editor of Problems of Post-Communism and was also editor of Russian Politics and Law from 2009 to 2016. Dr. Gorenburg received a B.A. in international relations from Princeton University and a Ph.D. in political science from Harvard University. He blogs on issues related to the Russian military at http://russiamil.wordpress.com.

Dr. Graeme P. Herd is a Professor of Transnational Security Studies and Chair of the Research and Policy Analysis Department at the George C. Marshall European Center for Security Studies (GCMC). Dr. Herd runs a monthly Seminar Series which focuses on Russian crisis behavior, the Russia-China nexus, and its the implications for the United States, Germany, friends and allies. Prior to joining the Marshall Center, he was the Professor of International Relations and founding Director of the School of Government, and Associate Dean, Faculty of Business, University of Plymouth, UK (2013-14). Dr. Herd has published eleven books, written over 70 academic papers and delivered over 100 academic and policy-related presentations in 46 countries.

The articles in this seminar series reflect the views of the authors and are not necessarily the official policy of the United States, Germany, or any other governments. 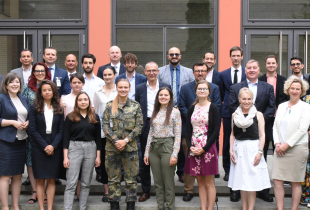 The European Security Order at a Turning Point 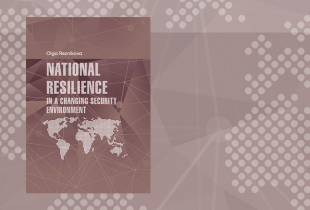 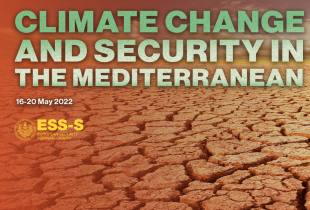