GARMISCH-PARTENKIRCHEN (Sept. 1, 2020) – The question “Are Human Rights Threatened during COVID-19?” was the topic of a virtual online seminar held at the George C. Marshall European Center for Security Studies Sept. 1.

This seminar focused on the respective situation in Southeast Europe and Western Balkans. 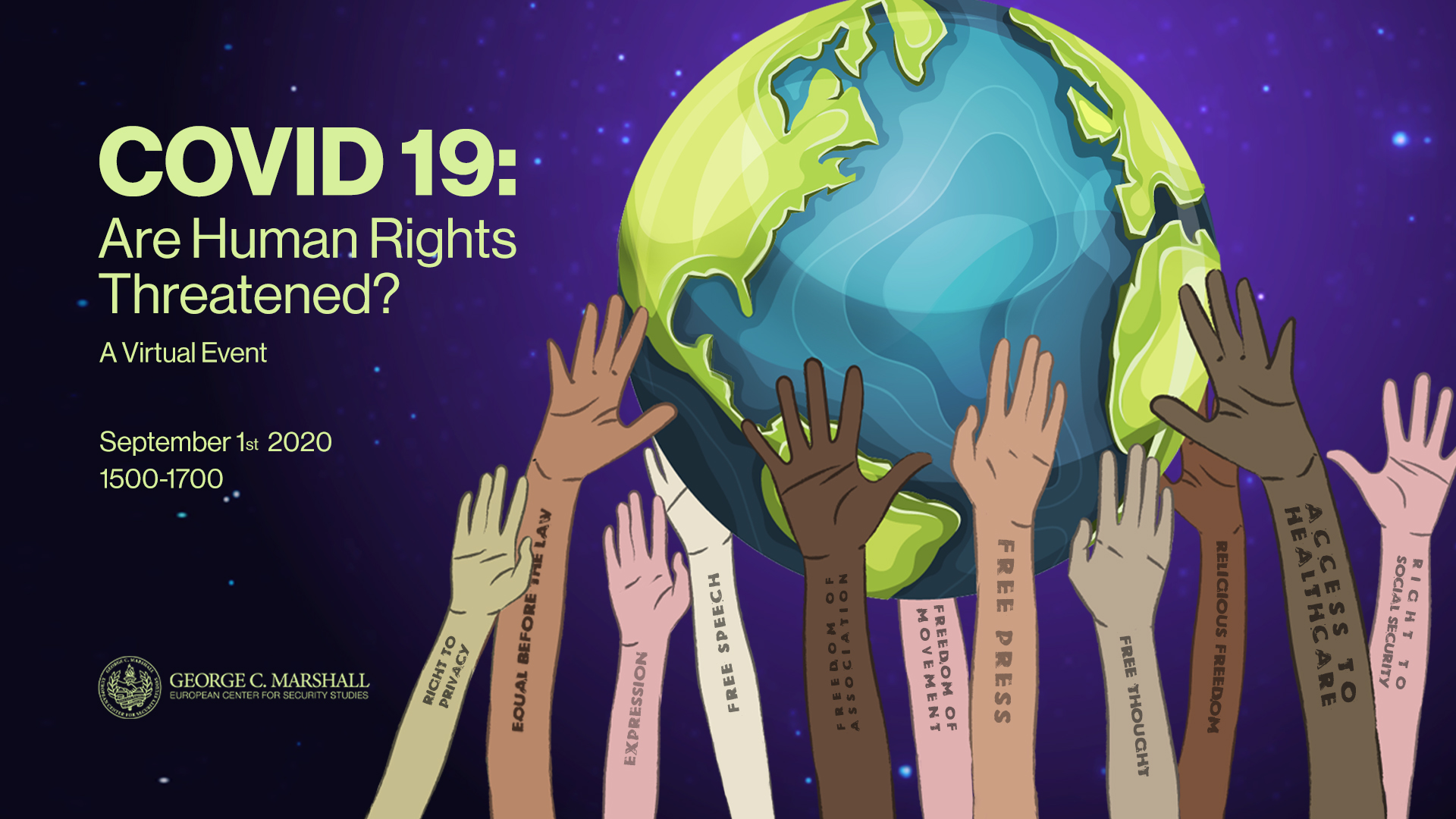 DoD graphic by M. Zachary Sherman
GARMISCH-PARTENKIRCHEN (Sept. 1, 2020) – The question “Are Human Rights Threatened during COVID-19?” was the topic of a virtual online seminar held at the George C. Marshall European Center for Security Studies Sept. 1.

Rozenits said, "Due to the uncertainty and the unclear development, many people have thought that all measures, and I stress 'ALL', are justified to limit and contain the new deadly virus, reduce the rate of infection and mortality, and finally eradicate COVID-19.”

He added, “We have seen the tension between our human rights, such as freedom of movement, freedom of assembly and the protection of personal data, and the desire - or rather the obligation - of our governments to protect ourselves from the virus.”

Ms. Herrmann presented her findings from her research paper by analyzing basic rules, standards and regulations as well as the legal situation in the European Union, the U.S., Germany, Italy, Israel, China and Singapore. The focus was on state measures on fundamental rights such as the protection of personal data, the free movement of persons and goods and the freedom of assembly.

As a summary, Ms. Herrmann said, “Emergency measures like restrictions and using technological solutions, such as the ‘Corona App,’ both on legal basis, demonstrated positive outcomes as regards in fighting the virus.”

She added, “Although protests are likely to arise in every country, the majority of the Europeans have proven to respect the measures imposed by their governments since the consideration of democracy has been at the heart of these actions.”

Von Münchow described the situation as a trilemma. “It is in the state’s interest and duty to ensure a functioning health sectors and thus to protect the life of patients in critical state,” he said. “It is of course also in a society’s interest that the economy thrives. This allows entrepreneurs to make use of their property to generate wealth and employers to exercise a profession.

“And lastly,” he added, “Restrictions should be careful introduced in order to maintain the citizens' fundamental rights. The challenge is to prioritize in times of pandemic and to formulate rules to balance all civil and human rights at stake. In most European countries, fundamental rights, such as freedom of expression, liberty of the press, freedom of academia or access to courts, were not restricted."

"However," he said, "Enforcing masks and physical distance and prohibiting demonstrations are serious interferences into the individual or collective freedom of personality. It is of utmost importance to stress that courts constantly correct corona-related restrictions, because they are assessed as disproportional.

Zeneli presented the current situation and the development after the declaration of emergency by the governments of the Southeast Europe and Western Balkans.

“In addition to losing many lives, COVID-19 hit the economy hardest, especially tourism,” she said. “The unemployment rate rose to 20 percent, and for young people, to nearly 40 percent. Some of GDP will shrink to as much as nine percent, and the recovery will last for many years. The consequences are the dependence on transfers (e.g. KOS 15-20%) and increased capital inflow, opening the door to foreign influence and informal market. EU support is needed more than ever – 410 million Euros so far to answer COVID-19.”

The participants gave their statements regarding the COVID-19 situation in their countries in general and in particular the effects regarding Human Rights.

As a participant, the Executive Director of the Austrian Marshall Plan Foundation, Dr. Markus Schweiger, focused on the necessary functioning of the transatlantic relationship. One participant enriched the discussion by saying, "In the Western Balkans, people don't like rules, and therefore it was necessary to issue strict orders to comply with the restrictions and rules."

Herrmann and Rozenits summed up the seminar.

"Covid-19 endangers our societies and international relations, and a certain division is already visible. We must pay careful attention to our own restrictions, and we must use our human rights to balance them and even counter conspiracy theories,” Herrmann said.

Overall, the online event once more deepened the constructive network between the Garmisch-Partenkirchen based Center and its alumni who work as security professionals along Europe’s eastern flank.