Ambassador Sergio Piazzi, Secretary General of the Parliamentary Assembly of the Mediterranean, Dr. Elai Rettig from Washington University in St. Louis,  and Professor Constantinos Adamides from the University of Nicosia, Cyprus, discussed the connection between interstate conflict and cooperation patterns on the one hand, and energy discoveries on the other. Depending on the perspective of the country in question, trilateral partnerships are perceived to both strengthen and weaken regional security. The Eastern Mediterranean basin can be viewed as “regional security sub-complex” although an integrated security architecture with the involvement of all major actors is missing. Littoral states such as Israel pursue individual strategies to increase their security. The discussion showed how multilateral actors like PAM manage to keep channels of interaction and dialogue open when official interstate communication proves difficult or even impossible.

The second panel opened a debate on the impact of regional developments on external relationships. Specifically, how political changes in the Eastern Mediterranean have affected relationships between Turkey and the U.S., Turkey and Russia, Egypt and the West, and Germany and Greece.

Ambassador Selim Yenel, President of the Global Relations Forum in Istanbul, Professor Gawdat Bahgat from the Near East South Asia Center for Strategic Studies in Washington D.C., and Dr. Jens Bastian, independent political and economic analyst at the Hellenic Foundation for European and Foreign Policy in Athens, gave accounts of the dynamics at work, to include the historical perspective.

The ideologizing and personalizing of Turkish foreign policy over the last five years has proven to be an important factor, as did the increased presence of Russia and China in the Eastern Mediterranean. An interesting debate evolved on the question of how far Chinese influence is politically motivated or purely commercial in nature. 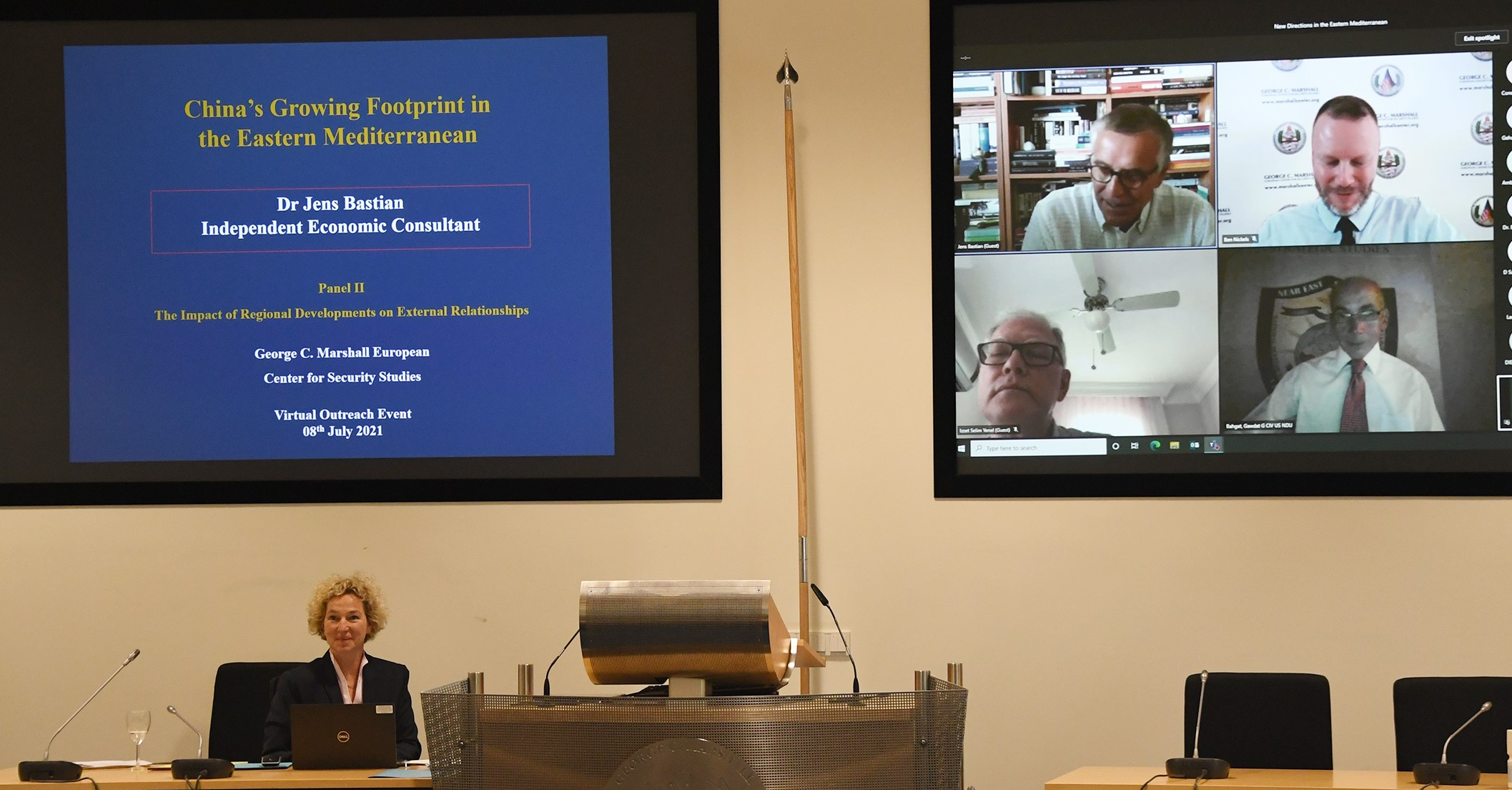 Panel three changed the perspective again to focus on the prospects for a comprehensive approach to the Eastern Mediterranean by the European Union and NATO. Alexandre Escorcia, Deputy Permanent Representative of France to NATO, and Professor Michaël Tanchum, Senior Fellow at the Austrian Institute for European and Security Policy in Vienna and Professor at the University of Navarra, Spain, agreed that a greater political role by the EU is desirable. While NATO had to engage in internal crisis management among some of its members, EU member states with important stakes in the Eastern Mediterranean have chosen to develop their own coalitions with external partners. Different configurations under the leadership of France and Italy are the result.

With regard to investments in infrastructure, technology, and connectivity in the Mediterranean region, Europe should not be looking to leave the lead to other players, like China or the Gulf states. The economic development of the southern shore of the Mediterranean Sea will be crucial to connect Europe with the rising African continent.

Air Force retired Brigadier General Dieter Bareihs, U.S. Deputy Director of the Marshall Center, thanked all speakers and participants for the lively and fruitful discussion and expressed his hope to soon host in-person events in Garmisch-Partenkirchen. The three panel sessions were moderated by Dr. Katrin Bastian, Dr. Benjamin Nickels, and Dr. Valbona Zeneli, all of them colleagues at the College of International and Security Studies at the George C. Marshall Center.