The Trump Administration and the Balkans

Donald Trump’s election as U.S. President topped the list of recent dramatic political developments across North America and Europe. Its potential significance for the Balkans was highlighted by Senator John McCain’s conclusion from a spring 2017 tour that rising tensions in the region require intensified American engagement. In McCain’s telling, the mix of ethnic friction, terrorist recruitment, and Russian interference mean “[w]e ignore this region at our peril.”1

How the Trump administration might choose to respond to such calls has been open to debate. At least three conceptions of its approach – special relationship, new nationalism, and business as usual plus – have emerged. The weight of initial evidence favors the last, but this remains tentative and partial. A fuller version will require coordinated action with Germany, the European ally with greatest concurrent influence and interest in the region.

The notion of U.S-Balkan ties mirroring the closeness traditionally ascribed to U.S.-British ones rests on a personal basis. As President Trump put it in July, “[t]his region has a special significance to me because…my wife is from Slovenia.”2

Melania Trump, formerly Knavs, was indeed born and raised in that country in the Yugoslav era. This has now triggered a mini-boom in American tourism, including organized tours with stops at the First Lady’s childhood home and grade school. Nonetheless, spillovers into policy seem limited.

For one thing, Slovenes are famously ambivalent about their connection to the Balkans. Most prefer to view themselves as culturally more rooted in Habsburgian Central Europe. President Trump’s quote above actually comes from a speech in Warsaw at a summit of the Three Seas Initiative, a group of twelve EU states that includes Bulgaria, Croatia, and Romania but none of the “Western Balkans.”

Moreover, Melania Trump has kept to a more strictly private role than some of her predecessors. She practices neither the “two for the price of one” involvement in policy that Hilary Clinton offered in the 1990s nor the concerned watch over her husband’s schedule that Nancy Reagan maintained the decade before. Similar contrast can be drawn with President Trump’s first wife Ivana’s open offer of service as ambassador to her native Czech Republic. 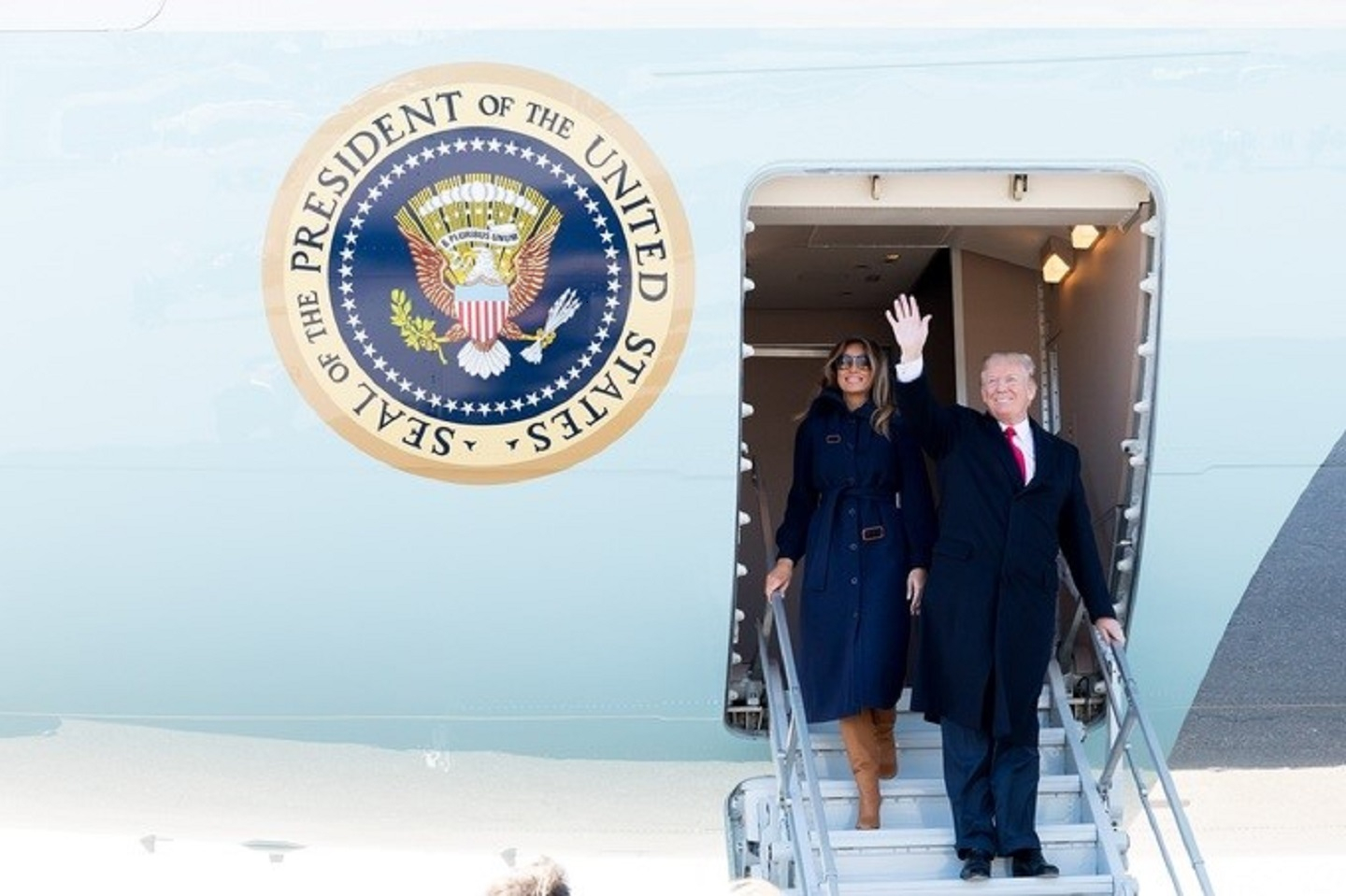 Several conservative to far-right political actors in Southeast Europe have embraced the alternative perspective that a Trump presidency would bring a more nationalist U.S. policy also toward their region. Perhaps the best example was the pro-Trump demonstration organized by Vojislav Seselj, the Serbian Radical Party leader accused of 1990s war crimes, during outgoing Vice-President Joe Biden's visit to Belgrade in August 2016. Šešelj and his counterparts took candidate Trump’s combative style, criticisms of NATO, and calls for closer ties with Russia as in line with their own outlook.

Some of President Trump’s speeches since his election have further nurtured such perceptions. Examples include the emphases on “America First” at the President’s inauguration, defending “Western civilization” in Warsaw during the summer, and national sovereignty at the U.N. General Assembly in the fall.

In practice, however, reality has fallen short of Balkan nationalists’ expectations. Several advocates of dramatic change within the administration, such as former chief strategist Steve Bannon, have left their official posts. The most prominent actual reversals, such as withdrawal from the Trans-Pacific Partnership and the Paris Climate Accord, have not directly applied to Southeast Europe. In the meantime, Trump has deemed NATO “no longer obsolete”3 and Congress has strengthened sanctions against Russia.

Business as Usual Plus

This has left the administration implementing a course toward the Balkans that looks more like business as usual or even modestly enhanced business as usual plus. Despite contrary speculation (and later viral video of President Trump pushing past the country’s Prime Minister), the administration backed Senate ratification of Montenegro’s accession to NATO. Vice-President Michael Pence’s congratulatory speech at a regional summit in Montenegro in August emphatically embraced continuity as a rhetorical device to underline persistent U.S. support for the Dayton Accords, Serbia-Kosovo dialogue, and further Euro-Atlantic integration.4

Over the spring and summer U.S. Deputy Assistant Secretary of State for South Central Europe Hoyt Yee also took the lead in brokering resolution of a series of political crises that had threatened formation of a government in Macedonia, opposition participation in elections in Albania, and “chaos” in Kosovo following disputes over establishment of a military and a border agreement with Montenegro.5 The Macedonian case in particular had resisted prior mediation by top EU officials and seemed headed toward violent escalation. Yee also offered support for a subsequent, long-delayed friendship treaty between Macedonia and Bulgaria.

Such notable developments notwithstanding, questions remain about the depth and durability of this initial pattern, including in regard to diplomatic personnel. To be sure, new Assistant Secretary of State for Europe and Eurasia Wess Mitchell brings deep experience from his years heading the D.C.-based Center for European Policy Analysis. During his confirmation hearing in September, Mitchell identified “strengthening the Western alliance” as his “central task” and stressed he would “urge Moscow to cease its destabilizing activities in Ukraine, Georgia, Moldova, and the Balkans.”6 On the other hand, Hoyt Yee is due for a rotation, and it is unclear whether his more region-specific slot will be retained within the State Department’s ongoing reorganization. At the same time, some have interpreted the early replacement of popular U.S. ambassadors in the region as a sign of de-emphasis.

A more fundamental issue is what has driven the gradual drift of American attention since the hot conflicts of the 1990s: the pull of competing challenges at home and abroad. Among the latter, the North Korean and Iranian nuclear programs, terrorism, and challenges from China in trade and other matters have topped the administration’s agenda. Meanwhile, domestic economic and social divisions have softened support for global engagement. This combination leaves even a prominent figure such as John McCain a virtual voice in the wilderness in warning of potential escalation of problems in the Balkans.

Given the preceding mix of factors, the Trump administration’s most promising path forward toward Southeast Europe lies in pursuit of joint initiative with Germany. Europe’s serial crises since 2008 have led its strongest economic power to assume broader shared responsibility for the continent’s security. By 2015, Serbia’s Prime Minister (now President) Aleksandar Vučić explained that Chancellor Angela Merkel’s “decisive role” meant that Balkan nations’ “hopes rest on her.”7

A U.S.-German tandem would recognize both the specialness and limits of America‘s position in the region. It would follow White House statements that while “America first doesn’t mean America alone,”8 bilateral interactions are generally preferred to multilateral ones. Finally, it would bring needed reinforcement and innovation to the approach of business as usual plus; per the oft-quoted line from Guiseppe di Lampedusa’s novel The Leopard, given dynamic developments, “if we want things to stay as they are, things will have to change.”

Closer coordination with the United States should also be welcomed by Germany. Fresh U.S.- German initiative could fill the potential gap from the scheduled conclusion of the five-year Berlin Process project in 2018. Any successes would burnish Angela Merkel’s legacy as she prepares to enter her likely fourth and final term. Cooperation on matters of common interest in the Balkans could also offset friction over other issues such as climate and trade. It could become a prominent pillar of the “strategic dialogue” announced by U.S. Secretary of Defense James Mattis and German Minister of Defense Ursula von der Leyen at the George C. Marshall Center in June 2017.

A potential lead-off project could be a joint push to advance Macedonia’s candidacy at NATO’s summit in Brussels next summer. Symbolically, the timing would roughly coincide with the tenth anniversary of the Alliance’s conditional offer of membership at its 2008 Bucharest meeting. Various formulas would be possible, including backing proposals to issue a formal accession invitation and use the ensuing ratification period to resolve the country’s name dispute with Greece. Regardless of the details, a genuine breakthrough would offer a timely counter to residual tensions in the country and reinforce the credibility of NATO’s open door. It could pave the way for further efforts on outstanding issues between Kosovo and Serbia and political stalemate in Bosnia-Herzegovina.

As the Trump administrations heads into its second year, the Balkans presents a mid-spectrum set of challenges: serious enough to deserve greater attention but potentially manageable enough to yield policy “wins” at moderate cost. Working together with Germany would both boost the odds of progress and spread burdens on time and resources. A robust, coordinated version of business as usual plus in Southeast Europe could also generate positive spillover for transatlantic relations writ large.

1 John McCain, “The Balkans are Heating Up Again - and Washington is Nowhere to be Seen,” Washington Post, April 27, 2017, https://www.washingtonpost.com/news/democracy-post/wp/2017/04/27/the-balkans-are-heating-up-again-and-washington-is-nowhere-to-be-seen/?utm_term=.f3f7ddfd777e.

5 “The Chaotic Western Balkans Take a Sudden Turn for the Better,” The Economist, May 19, 2017, https://www.economist.com/europe/2017/05/19/the-chaotic-western-balkans-take-a-sudden-turn-for-the-better.

6 Statement of A. Wess Mitchell, Nominee to be Assistant Secretary of State for European and Eurasian Affairs, Senate Committee on Foreign Relations, September 19, 2017, https://www.foreign.senate.gov/imo/media/doc/091917_Mitchell_Testimony.pdf.

Dr. Matthew Rhodes is Director of Programs in Central and Southeast Europe and a professor of national security studies at the Marshall Center.

An earlier version of this paper was presented at the conference “Regional Rivalries and Security in the Western Balkans” in Struga, Macedonia, 25-27 September 2017.