This year our Strategic Competition Seminar Series (FY23 SCSS) activities focus on the theme of alternative Ukrainian future trajectories and the implications these may have for Russia and the West. To this end, SCSS#2 identified and explored the impact of multiple militaries on Russia’s war fighting effort in Ukraine. Has Russia achieved ‘unity of command’ with the appointment of Gen Surovikin to overall commander of Russian forces fighting in Ukraine? How does theory of unified command differ from practice? What are the operational effectiveness implications of discrepancies between the two?

The integrity of Russia’s military command is a constant issue. Russia’s multi-axis military invasion of Ukraine, initiated at 0400 CET on 24 February 2022, was led by multiple commanders. In October 2022 Gen Surovikin was appointed top Russian commander. However, unity of command has not appreciably strengthened. On paper Russia adopts a formal chain of unified command of the Russia Group of Forces for Special Military Operation in Ukraine. Gen Surovikin is the unified commander and as such is ultimately responsible for any resultant loss of operational effectiveness. Figure 1 outlines how in theory Russia’s formal chain of command should operate in Ukraine. 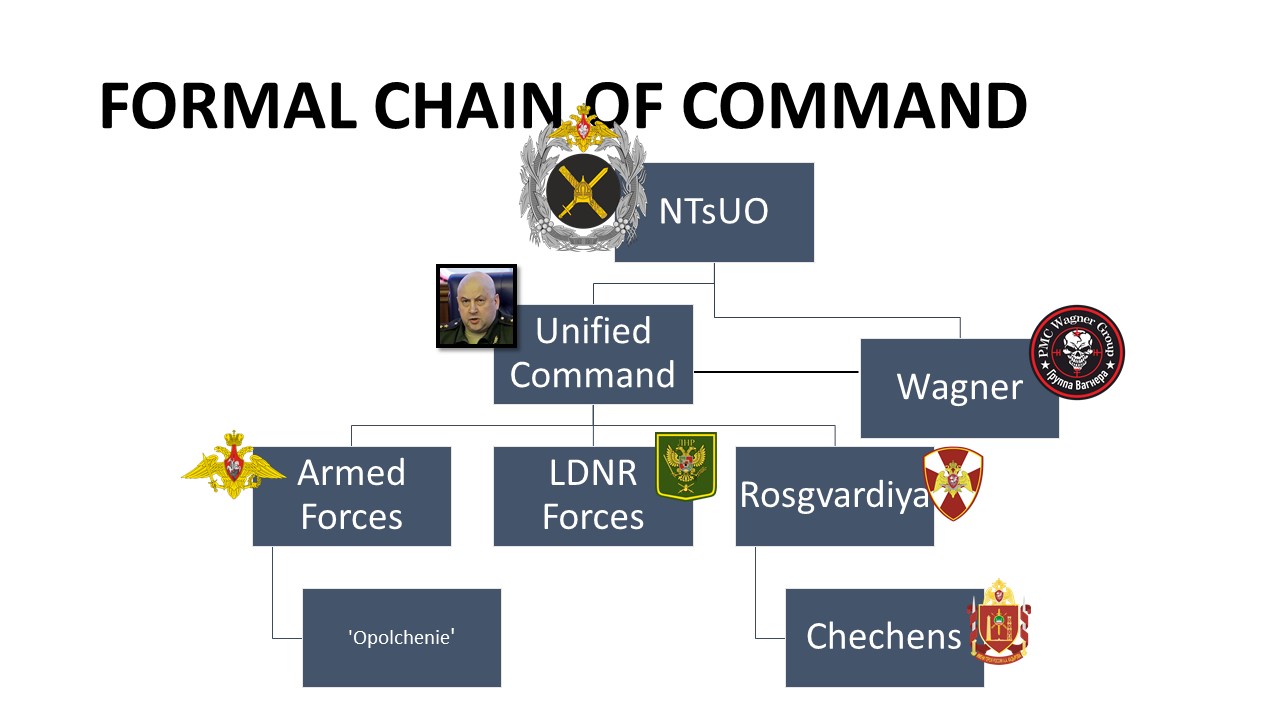 We can see that a wide variety of military actors are subordinated within this unified chain of command. It is difficult to verify with certainty thee current numbers of these actors as figures regarding ‘attrition rates’ and reconstitution with mobilized troops are not readily available. Approximations can be made and, given this, we should focus less on the exact figures and more on the relative balance between different units.

The Real Chain of Command

The Russian chain of command that appears to operate in practice in Ukraine is more chaotic and fragmentary than the theory suggests. This introduces needless friction into cooperation between different units and branches, limiting combined arms efforts, mutual logistical support and so operational effectiveness. Figure 2 highlights how in practice Russia’s informal chain of command does operate in Ukraine. 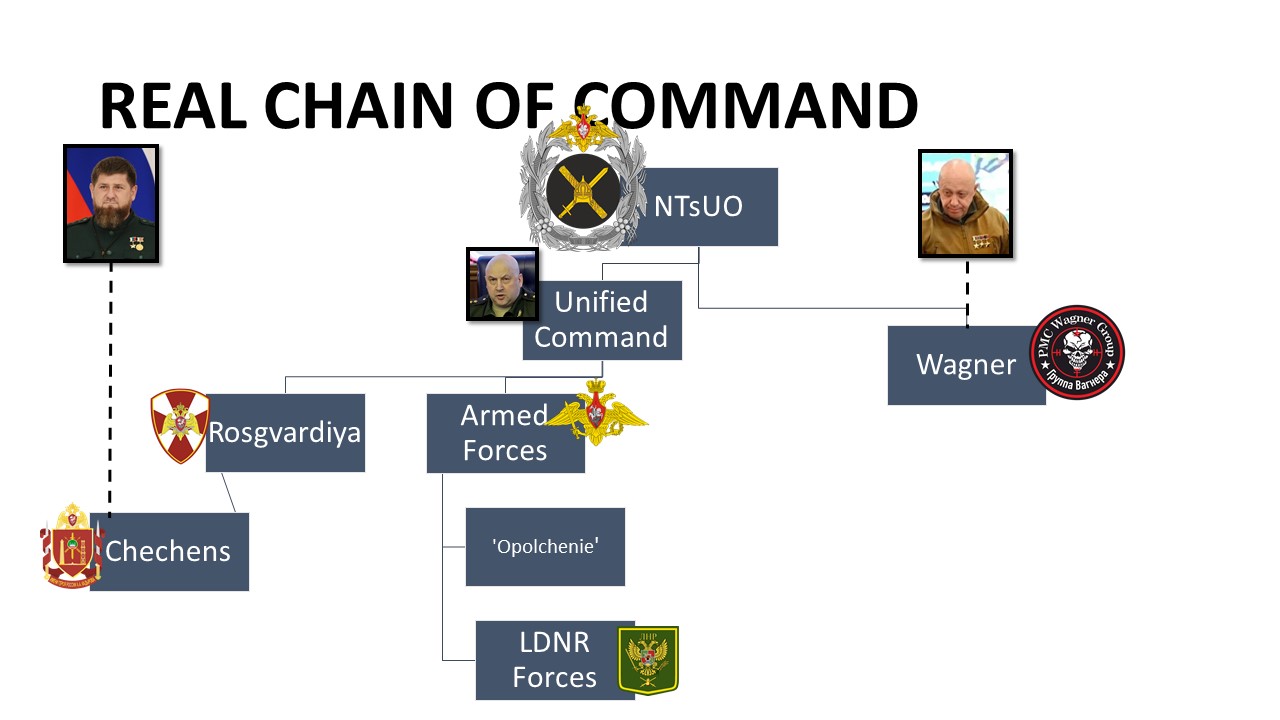 What are the notable differences between theory and practice?

Russia’s ‘Unified Command’ is not unified and does not therefore command as it should. This lack of unity only exacerbates friction between the regular military, Rosgvardiya, Wagner, Kadyrovsky, and militias. While it is difficult to assess the potential in combat effect if Russia would be able to realign its fragmented command structure, we can note shortcomings that arise from the current state of affairs.

From Symptoms to Causes and Future Trends

The current fragmented command structure reflects the political fundamentals of the Russian state. To put it another way, where power lies on the battlefield is where power in Moscow. President Putin creates checks and balances through non-institutionalized fragmentation so that groups compete against each other and he can exercise arbitration power and uphold a necessary function in the system. Added to this, the divergent competitive goals (desire to optimize revenues, recruit best personnel, define mission and narrative) of these sub-institutional actors promotes clashes. Putin’s ‘power vertical’ is a fiction.

In addition, the more entrepreneurial Russian elements formally subordinated in the chain of command all have other functions in the Putinite system which legitimizes their autonomy. Kadyrov’s independent standing is seen as necessary to avoid a third Chechen war, even as Kadyrov seeks to instrumentalize involvement in the war to secure heavy weaponry for his light infantry forces, and prepare for life after Putin (his patron). Zolotov’s Rosgvardiya is all that stands between a ‘color revolution’ and the Kremlin, at least in the paranoid mindsets of Russia’s national security elite. Prigozhin’s utility stems from being a fixer - Wagner offers the possibility of quick fix solutions. Like Kadyrov, Prigozhin is a ‘conflict entrepreneur,’ seeking to monetize conflict (governors outsource the training of her militias to Wagner) and privatize the profits from ‘patriotic public service.’

Prigozhin is an oligarch of the third order and lacks unlimited funds. The opaqueness regarding the military men around him and his own command structure leads to a questioning of his standing: is he a front and mouthpiece? If so, for whom? Is it the GRU? Some have speculated that it is the GRU, basing this understanding on Wagner’s genesis in 2014-15 in Donbas and Syria. However, the GRU is tasked to operate spetsnaz behind enemy lines (not in evidence in Ukraine), not police or Wagner. Moreover, Prigozhin publicly denigrates the competence of Russia’s General Staff (GRU is subordinated to the GenStaff), the performance of individual Russian Generals (Lapin) and professionalism of Defense Minister Shoigu. Such verbal tirades are hardly indicative of GRU ‘control’ over Wagner. The SVR focuses on gathering political (assessing political will) and technical intelligence where it can in the West and so is not a contender. The FSB’s military counter-intelligence directorate monitors the Russian military, and therefore Prigozhin and Wagner will, formally at least, fall under their oversight.

Russia seeks to avoid losing the war and this means dragging the conflict out to allow for reconstitution. Time therefore may institutionalize the actual current operating chain of command and improve its functioning. Russia’s reliance on a wide variety of military actors appears dysfunctional but is this offset by the benefits of greater force generation? Although mobilization should have strengthened manpower of the regular army, it is not clear if this is the case. Certainly though, the regular military increases in size relative to militias, which are subsumed within it, not to say cannibalized. It is a mistake to underestimate Russian capacity to cope with dysfunctionality. It is also possible that Russia slowly learns from the Syrian example and experience of coalitional warfare: “Managing the Chechens is like getting Hezbollah to follow the plan.”

Looking to the future, current attrition rates coupled with sanctions and technology controls, suggest it will take at least 10 years to reconstitute the Russian military. How Russia reconstitutes will all depend on who is Russia’s political leader and the mission they set the military, particularly with regards Europe and Eurasia. Politics will have primacy. The reconstitution slogan may well be “build back better” but the reality will be “build back basics,” first and foremost regarding a force structure fit for purpose and a functioning chain of command.

Dr. Mark Galeotti is director of the London-based consultancy Mayak Intelligence, an honorary professor at the University College London School of Slavonic and East European Studies, a senior associate fellow at the Royal United Services Institute, and a senior non-resident fellow at the Institute of International Relations Prague. He is an expert and prolific author on transnational crime and Russian security affairs.

Dr. Pavel K. Baev is a Research Professor at the Peace Research Institute Oslo (PRIO). He is also a Senior Non-Resident Scholar at the Brookings Institutions (Washington, DC) and a Senior Research Associate with the French International Affairs Institute (IFRI, Paris). Pavel specializes in Russian military reform; Russian conflict management in the Caucasus and Central Asia; energy interests in Russia’s foreign policy; and Russian relations with Europe and NATO.

The Clock Tower Security Series provides short summaries of Seminar Series hosted by the George C. Marshall European Center for Security Studies. These summaries capture key analytical points from the events and serve as a useful tool for policy makers, practitioners, and academics.

This Clock Tower Security Series summary reflects the views of the authors (Mark Galeotti  and Graeme P. Herd) and is not necessarily the official policy of NATO, the United States, Germany, or any other governments.