GARMISCH-PARTENKIRCHEN, Germany (April 11, 2019) – As technology makes the world smaller, the partnerships that are formed during the Program on Terrorism and Security Studies at the George C. Marshall European Center for Security Studies become that much more important, said Supervisory Special Agent Ben Beno, with the Joint Terrorism Task Force at the U.S. Federal Bureau of Investigation in Chicago.

“Being a part of this program as a participant is extremely valuable as a counterterrorism professional because it opens your eyes and gives you an idea on what is happening not just where you are, but also what is happening in countries all over the world,” said Beno, who attended PTSS in 2017. He came back to the program to impart his knowledge about terrorists’ use of the internet to 63 security professionals from 47 countries March 25.

These professionals graduated from the 29th iteration of this transnational counterterrorism program April 10 at the Marshall Center based here.

“These professionals from around the world have shared their best practices and experiences with each other so now when they go home, they’re better equipped to deal with terrorism in their own countries,” said retired U.S. Marine Corps Col. James Howcroft, Marshall Center’s PTSS program director.

Held twice a year, PTSS provides advanced professional education to those charged with understanding and then reducing the scope and capability of terrorism threats in their countries, and possibly through their new network of more than 2,000 counterterrorism alumni from 128 countries, their regions and throughout the world.

This four-week resident program supports the Marshall Center’s increasing emphasis on transnational threats and challenges. The Marshall Center is a 25-year old German-American security partnership that has produced generations of global security professionals schooled in American and German security policies. 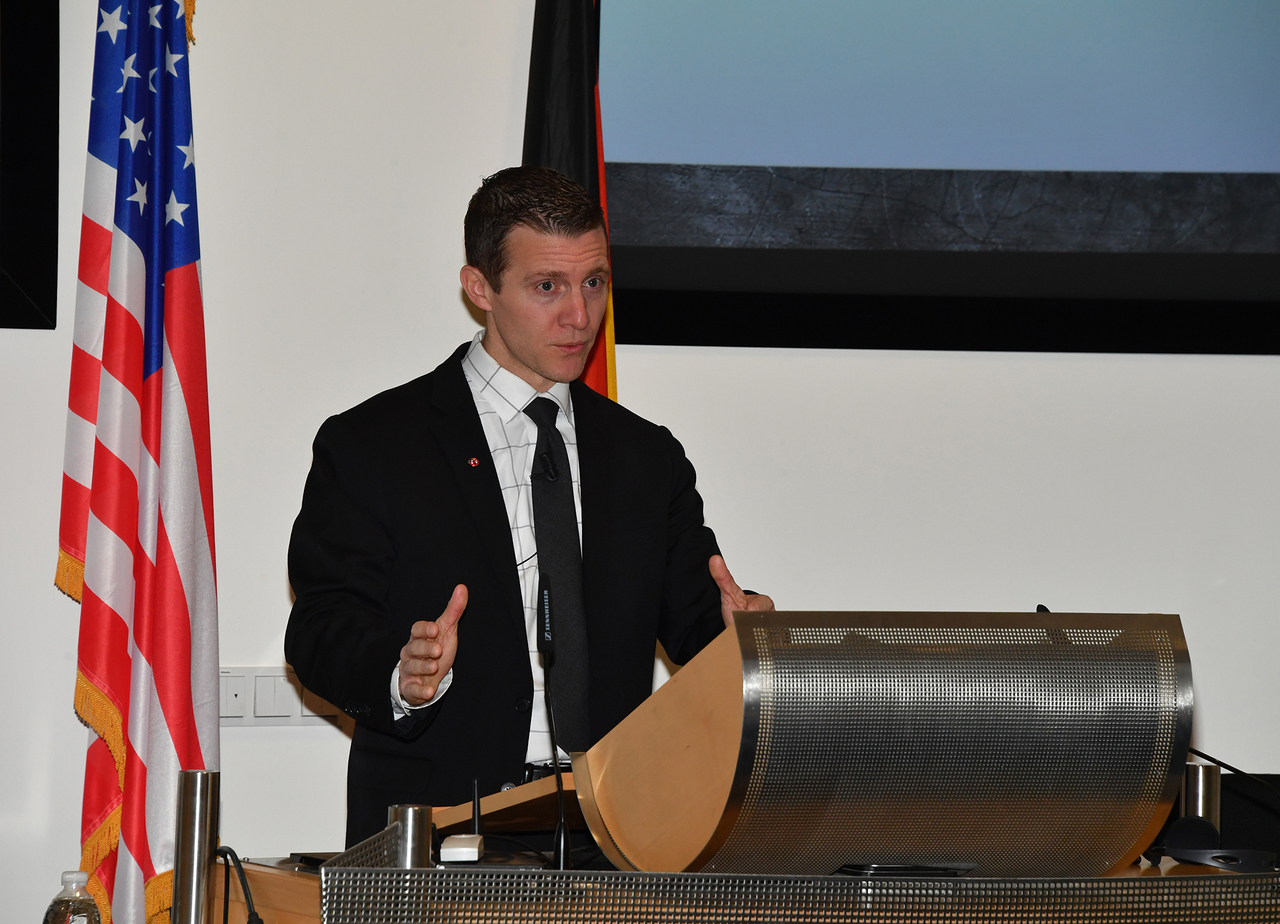 DoD photo by Karl-Heinz Wedhorn
GARMISCH-PARTENKIRCHEN, Germany – Supervisory Special Agent Ben Beno, with the Joint Terrorism Task Force at the U.S. Federal Bureau of Investigation in Chicago, talks about terrorists’ use of the internet during the Program on Terrorism and Security Studies at the George C. Marshall European Center for Security Studies based here April 1.

Beno was one of 10 speakers in this program who are PTSS alumni. The program’s adjunct professors were also alumni from this program.

“I think the PTSS network is probably the most important outcome of this program, so I bring back alumni to participate in the program as speakers and adjunct professors,” Howcroft said. “Our alumni share best practices and information, and work together across borders and ministries on a daily basis to fight terrorism.”

The importance and strength of this global network that assists counterterrorism professionals in their everyday jobs was a surprise to Police Officer Indrit Doda, from the Counterterrorism Directorate in the Republic of Albania’s police force.

“I was a little skeptical about this network thing, but as I met people and made friends, and heard presentations from those who sat where I am sitting now, I can now tell that this alumni network is one of the most important things that I learned here,” Doda said. “And, I know when I need assistance, especially researching a problem, I can reach out to my classmates and professors.”

He added, “These four weeks were a great opportunity to get to know each other and to communicate in the mid-level, decision-making process.”

Doda said there were a lot of other things he learned here as well.

“One of the latest presentations was about financing terrorism, which was a field that I didn’t think about before, but this information on how terrorists fund their operations will be very helpful to me in the future,” Doda said.

Other topics ranged from terrorist and counterterrorism strategies, to securing borders against traveling terrorists and to the increasingly important topic of woman in terrorism.

“I look upon PTSS as sort of a buffet or smorgasbord of subjects dealing with terrorism and what people are doing about it,” Howcroft said. “Each participant can choose what is applicable and useful for their countries and then bring it home and put it into practice.”

Teaching these topics were in-house counterterrorism and security studies experts from the PTSS team and Marshall Center faculty, as well as practitioners and experts from national and international, military and civilian agencies such as the FBI, U.S. Military Academy at West Point, Danish Institute for International Studies, Ministry of National Defense of Niger and even, Facebook.

“For me, PTSS created a new approach to terrorism and new skills to combat terrorism because during these four weeks, I discovered that terrorism has multiple faces from the perception of it to the political and economic context, and even in everyday situations,” Doda said. “It definitely changed my mindset regarding the approaches to terrorism and how to combat it.”