For four years, Brannon has worn the hat of Dean at the Marshall Center. On Sept. 26, Brannon removes it and departs Garmisch-Partenkirchen for a well-deserved retirement.

“I can’t begin to say how much this American patriot has done. He came here as Dean in 2012 at the time of sequestration.  He launched new courses in counter narcotics strategies, cyber security, combatting transnational organized crime and courses in regional security focused on Europe’s eastern and southern flanks.  He has changed the course of the Marshall Center and has positioned it well to address transnational challenges for the decades, ahead,” said Marshall Center Director retired U.S. Army Lt. Gen Keith Dayton during an award ceremony, Sept. 22.

Brannon admits he didn’t plan on a dedicated lifetime to federal service.  He was just a Texas farm boy who enlisted in the Navy after graduating high school.

“I didn’t start out with this aim in mind. I did grow up on a farm and I did join the Navy right after high school and I’d like to say for altruistic reasons that I somehow wanted to right the world’s wrongs. But it was actually because my job on the farm was to milk cows. So for anyone who has never milked a cow, you know they are big and stupid and the only positive outcome you can have with a cow is the milk,” Brannon said. “In 1968, I don’t think any of us back then could think there would be a 2016.”

Brannon served previously at the Marshall Center in 2007-2009, as course director for the center’s Senior Executive Seminar and Program in Applied Security Studies resident courses.  Work in the classroom is at the top of list of things he’ll miss most about the Marshall Center.

“I will miss people and programs because that has consumed me for 150% of my life.  But what I will really miss is the magic in the classroom.  When you’re a teacher and the door closes –it’s your ship and you’re the captain.  So I think it matters a lot when you are a teacher,” Brannon said.

Leaving the Marshall Center gave Brannon plenty of accomplishments to be proud of. Introducing web-based technology into the classroom for thousands of international students is the one milestone that tops all others.

“I spent a lot of time on ‘e-campus’. It was my baby and I certainly hope they don’t throw it out when I leave here. I think it changed the Marshall Center and was a metaphor for change here that allowed people the creativity to do what they do best. That made it difficult but what challenge doesn’t come with those kinds of obstacles? In retrospect we handled them well and we managed them well. I think looking back over four years, we did it,” recalled Brannon.

Brannon isn’t shy to share some regrets and low points to his more than seven years of work at the Marshall Center.  The loss of his former colleague Nick Pratt hit him the hardest. Pratt died in December 2013, and Nick Pratt Hall in Bldg 106 is dedicated in Pratt’s memory for his work in establishing the Program in Terrorism Security Studies (PTSS) resident course.

“I was in an office across the hall from him when I was first here in 2006-2009. He ran PTSS and I ran the Program in Applied Security Strategies (PASS). Looking back on that, I learned a lot from him. I think he saw me as an unfinished project. He wasn’t crazy about my ideas of the whole tech, ‘e-campus’ thing I was trying to put together when I arrived here as Dean.  He wanted me to spend more time on fundamental problems he thought the Marshall Center had.  He was never shy with his criticism. We had known each other for 10 years at that point so it was pretty easy to lock horns and walk away as a survivor,” Brannon said.

Brannon turned over the duties of Dean to Andrew Michta, who like Brannon, previously taught at the Marshall Center in 2005-2009.  An in-box on the Dean’s desk holds some unfinished work Brannon hopes will get a look and taken on as a priority.

“When we were trying to save the Marshall Center in 2013 and 2014 from sequestration, those were the darkest days of the money crisis.  Every day was a challenge to make ends meet.  We did it and I think we pulled it off rather well. But there were casualties and we need to go back and look at those casualties and reconsider how we might reshape the future with a view of restoring what we lost. Top of that list I’d put professional development for faculty and staff.  In most colleges when it comes to cost cutting, that is one of the first things to go. We need to restore professional development.  Faculty will get stale.  Staff will get stale.  People will lose faith in themselves and their own credibility for what we pay them to do,” said Brannon.

“The missions here attract some of the most amazing people…not just students…but the staff and faculty.  We aren’t rank and file people, out of the parking lot.  We bring a lot to this center,” Brannon added.

“Nothing” is what Brannon tells anyone who asks him what he intends to do in retirement.  But when Brannon was U.S. Naval attaché to Russia, his day-to-day life reads like a character out of a Tom Clancy spy-thriller.  Having witnessed Russia’s economic collapse in 1998, NATO intervention in Kosovo a year later, the submarine Kursk disaster in the summer of 2000, and finally his expulsion from Russia for alleged espionage following reciprocal diplomatic statesmanship between Russia and the U.S., Brannon has a lot to write about.

“I started a book on the submarine Kursk disaster.  I have a lot of time invested in that story and I have a lot of first person memories.  I started it a long time ago but it was too sensitive then and too soon to rip any band aids off.  It’s been 15 years now so maybe in a year or two, I’ll dust off the manuscript and see what I can do with it,” Brannon said.

At the farewell ceremony where he was presented the Defense Department’s Superior Civilian Service and the Defense Security Cooperation Agency Exceptional Service Award among other accolades, Brannon was congratulated by a colleague and former boss.  U.S. Ambassador to Russia John Tefft traveled to Garmisch-Partenkirchen to celebrate his long-time friend’s retirement.

“This is a man who is not only a great patriot but he’s a man that despite that calm exterior and wonderful sense of humor is a man that is very powerfully driven.  The fact that he was a Navy enlisted man who became an officer doesn’t surprise me.,” Tefft began.

Recalling their days together teaching at the National War College in Washington, DC, Tefft shared a lasting impression about Brannon.

“What impressed me the most is that he’s working all day---teaching class and all of that—and this guy is getting his Ph.D. at Catholic University at night.  All of us when we’re leaving work say, ‘see you tomorrow’ and go home.  Brannon, he goes off and spends the evening doing classes to get his Ph.D. because he knows he wants to teach.  I can’t tell you how much respect I had for him for doing something like that.  This is a man who works really hard at what he does,” said Tefft. 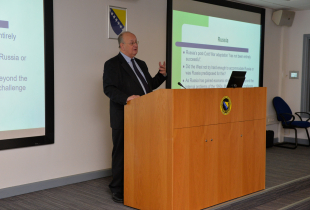 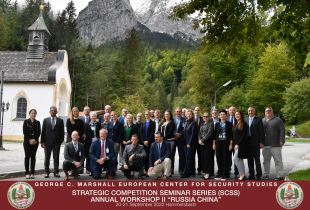 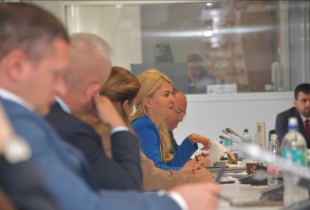