DUBROVNIK, Croatia (June 30, 2021) — Today concluded the 17th Summer School of the Hanns-Seidel Foundation in Dubrovnik, organized by its Zagreb office and the Institute for Development and International Relations (IRMO). In its support for South East Europe, the George C. Marshall Center for Security Studies sent Dr. Sebastian von Münchow, professor at the College of International and Security Studies to the Summer School. He gave a presentation and carried out a scenario-based workshop at the Summer School. His engagement in Croatia was one of the first outreach activities since the pandemic began.

After last year’s Summer School had to be cancelled, the Foundation and IRMO relaunched this program and invited 20 students of political sciences from the University of Zagreb for five days of lectures and debates on “Post-Pandemic Europe: Politics, Economy and Society”. The School usually funds students from all Western Balkan countries, but had to limit participation due to COVID-19 related restrictions. Nevertheless, this year’s program was enriched by speeches from the Member of the European Parliament, the Deputy Minister of Foreign Affairs of Bosnia and Hercegovina, the Head of the EU Delegation in the Republic of Croatia, and other executive professionals from the Western Balkans, as well as scholars. They also seized the opportunity to informally discuss where further reform steps are needed to ensure western integration. The Hanns Seidel Foundation Summer School has been held since 2003.

“I gave a presentation on ‘Vaccine Diplomacy & Vaccine Wars’ based on the Marshall Center’s recent research and publications elaborating how vaccination delivery became part of Great Power Competition.  In addition, I conducted four exercises with the students. They were built on fictitious crises scenarios where EU and NATO member states had to react to various threats by third actors under COVID-19 conditions.”, explains von Münchow.

The Head of the Hanns Seidel Foundation’s office in Zagreb/Croatia, Dr. Aleksandra Markić Boban, adds: “We are thankful that the Marshall Center sent a professor to this important program. And we do appreciate the Center’s flexibility to recommence sending its professors to events out of Garmisch. It feels great to carry out in-person activities again.”

Dr. Sandro Knezović, Senior Research Associate at the Department for International Economic and Political Relations of the Institute for Development and International Relations in Zagreb and frequent teacher at the Summer School underlines: “This is a crucial moment for the Western Balkans. The new administration in DC, the Slovenian EU Presidency and recently appointed German High Representative in Bosnia and Hercegovina raised hopes that the West refocuses on the region. It is time to overcome obstacles for transatlantic integration. The Summer School is an ideal forum to do capacity-building for future leaders and to discuss with current leaders how to speed-up the reform agenda”.

Dr. von Münchow concludes: “This was a great comeback for the Marshall Center in the Balkans after almost one and a half years. I appreciated being part of the capacity-building component of this Hanns Seidel Foundation engagement. It was also enjoyable speaking with the various representatives from Western Balkan states. I learned that many decision-makers can work together on solutions to pave the way for their countries to join the transatlantic community.” 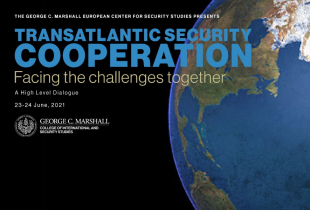