GARMISCH-PARTENKIRCHEN, Germany (Aug. 4, 2017) – Palestinian Preventive Security Service Lt. Col. Sameer Marouf Masri knew he was missing a part of the picture on how online cyber profiling could be a source of information in identifying terrorists in his country.

It was 2011, and Masri was named the first director of the newly established Counter Cyber Terror Department of the Preventive Security Service, an intelligence organization that protects the internal security of the Palestinian Authority.

At this time, Masri had close to 20 years of experience in the service, but terrorist use of the internet and cyberterrorism was new not only to him, but also his bosses.

“My bosses wanted to know what was going on online, specifically how terrorists were exploiting the internet to their advantage,” Masri said. “This was something entirely new to me, and I did not have much knowledge on what to do to gather information online to track down terrorists and stop them from radicalizing our youth.”

Help Available at the Marshall Center

But, Masri did know where to go for help. He just graduated from the Program on Terrorism and Security Studies (PTSS) at the George C. Marshall European Center for Security Studies. Offered twice a year, this four-week program provides advanced professional education to those charged with understanding and then reducing the scope and capability of terrorism threats.

“To my mind, the Marshall Center’s mission is to find solutions to today’s most pressing security problems,” said James Howcroft, PTSS course director. “I think one of the great strengths of our PTSS program is the fact that we do look at solutions and not just at the problem.”

Planning his new department, Masri contacted Marshall Center counterterrorism faculty and his fellow classmates. He also consulted the Marshall Center’s Research Library and GlobalNet, an alumni portal that provides a searchable directory of alumnus as a networking tool. The Marshall Center’s alumni network currently has more than 12,000 security professionals from 152 nations.

Masri said this network provided him the guidance and sage advice to be successful and make a seamless transition to combating cyberterrorism.

Fast forward two years later in 2012, Masri was still working out his department, but the world of cyberterrorism had grown.

“At this time, everyone was panicking about online cyber issues,” he said.  “My job and my department had grown in importance.  Not everyone understood how to combat cyberterrorism, but I was recognized as an expert.”

Masri was invited back to the Marshall Center for an alumni workshop. It’s at these workshops where best practices and lessons learned are shared by professionals involved in counterterrorism work every day.

During his first alumni workshop, Masri was introduced to a counterterrorism model used effectively by the New York Police Department to counter recruitment and radicalization of future terrorists. Masri said this lecture turned everything around for him.

“This model was the missing piece I had been looking for,” he said.

“The presenter at the time said that there is a very large number of people who live in New York so for them it was difficult to know where to start with their efforts so they came up with this model,” Masri said. “I thought this is similar to what I need as the web is a wide open space with a lot of people. So, I picked up this model, redesigned it for our needs to target online recruitment and implemented it.

“It worked, even with the limited available staff and resources that I had at that time,” he said. “Now, my department is a shining star among the Preventive Security Service.”

The Role of Women in Fighting Counterterrorism

A key building block of his redesign included adding more women security professionals into his department to find youth vulnerable to radicalization and terrorist recruiters online.

“One of the things that was kind of a shock even for me was that the women were so good at writing these avatars or profiles, and achieving unprecedented success,” Masri said. “They can come up with their own narratives very quickly, and they can go very far in implementing the model.

“They have the ability to convince people to trust them,” he said. “They are much better than men in developing the needed conversation because they are mothers, sisters and wives.”

His redesign and implementation of this model was so successful that he was invited back to the Marshall Center’s 2016 Global Counterterrorism Alumni Workshop that focused on “The Role of Women in Countering Terrorism and Violent Extremism.”

Practical Value of the Marshall Center

“Sameer’s experience really demonstrates the practical value of the PTSS program,” said Dr. Sam Mullins, Marshall Center’s professor of counterterrorism. “This is what PTSS is all about, getting people from different nations together to share their experiences and best practices for others to take that knowledge and find ways to apply it in their own countries.”

During this workshop, he shared a real-life account where one of his female security officers ran an 18-month operation in five countries to track and capture seven ISIS terrorists.

“She came to me with this mission, which was continuous and very complicated,” said Masri. “She is a dedicated wife and mother of four children, and she was very successful in this operation, and she followed the model, from beginning to end.”

Masri returned to the Marshall Center for a fourth time.  This time, he was an adjunct professor for the first time in PTSS 17-13.  That class of 81 participants from 57 nations graduated Aug. 3.

“It’s very likely one of those participants will use the contacts and knowledge gained over the past four weeks to make a difference in their nation like Sameer did,” Mullins said.

“Marshall Center offers a unique opportunity to meet people from different backgrounds, cultures and experiences,” said Masri, who is still the director of the Counter Cyber Terror Department. “Just sitting with your fellow participants, guest speakers and faculty talking about security issues can often show the missing part of the problem or situation.” 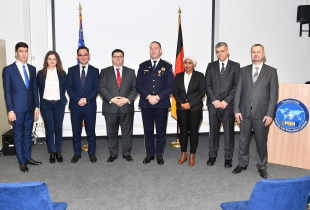