BUDAPEST, Hungary (Nov. 8, 2021) –  Over 30 Hungarian Marshall Center alumni and other participants attended an Alumni Outreach Networking Event in Budapest, Hungary on Nov. 2. The event, co-organized with the Hungarian Marshall Center Alumni Association, took place at the historic Széchenyi Assembly Hall of the University of Public Service-Ludovika and was closely coordinated with both U.S. and Germany Embassies in Budapest.

“Because of COVID-19 and the resulting travel and event restrictions, this was the first in-person alumni event for the Marshall Center Alumni Programs Office in Hungary since November 2019. In addition, this was our first-ever meeting at the University of Public Service in central Budapest and we owe a great debt to our hosts at the university, especially Dr. Balázs Mártonffy and Dr. Gábor Csizmazia from the University’s Institute for American Studies. Without their direct support to open doors of the university to us the event would not have been possible,” said Frank Lewis, alumni relations specialist and event co-organizer.

“Since the Marshall Center is a unique German-American partnership and trusted global network promoting common values and advancing collaborative geostrategic solutions, it’s only natural that we conduct these events in full coordination with the U.S. and German Embassies in our partner countries. We thank Mr. Streicher and Mr. Dillard for their event contributions and for their engagement with Hungary as a whole,” said Burelli.

Dillard thanked the alumni and stressed their ongoing contributions to transatlantic cooperation. He also reiterated President Biden’s stated priorities to return to a rule-based international order, and strengthen alliances and partnerships to tackle 21st century challenges. In addition, Dillard recognized NATO’s new strategic concept as essential to countering increased global competition, an increasingly reckless Russia, and an aggressive China. Dillard concluded his remarks with recognition of the 100th year anniversary of the establishment of the Hungary-U.S. diplomatic relationship.

Streicher, in his remarks, also echoed current threats to the rule-based international order and added cyber attacks and threats to infrastructure to the list of global challenges. He also mentioned the recent German election, with a likely three-party coalition government to be formed by December, which will require a balancing of competing demands between the Greens, Liberal Democrats, and Social Democrats. The immediate impact on German foreign relations remains to be seen.

The definitive highlight of the event was a “fireside chat” between Cavoli and U.S. Air Force retired Maj. Gen. Barre Seguin, director of the Marshall Center.  After opening remarks and interview style questions from Seguin, Cavoli also took several questions from the alumni audience, who were keenly interested in the discussion. 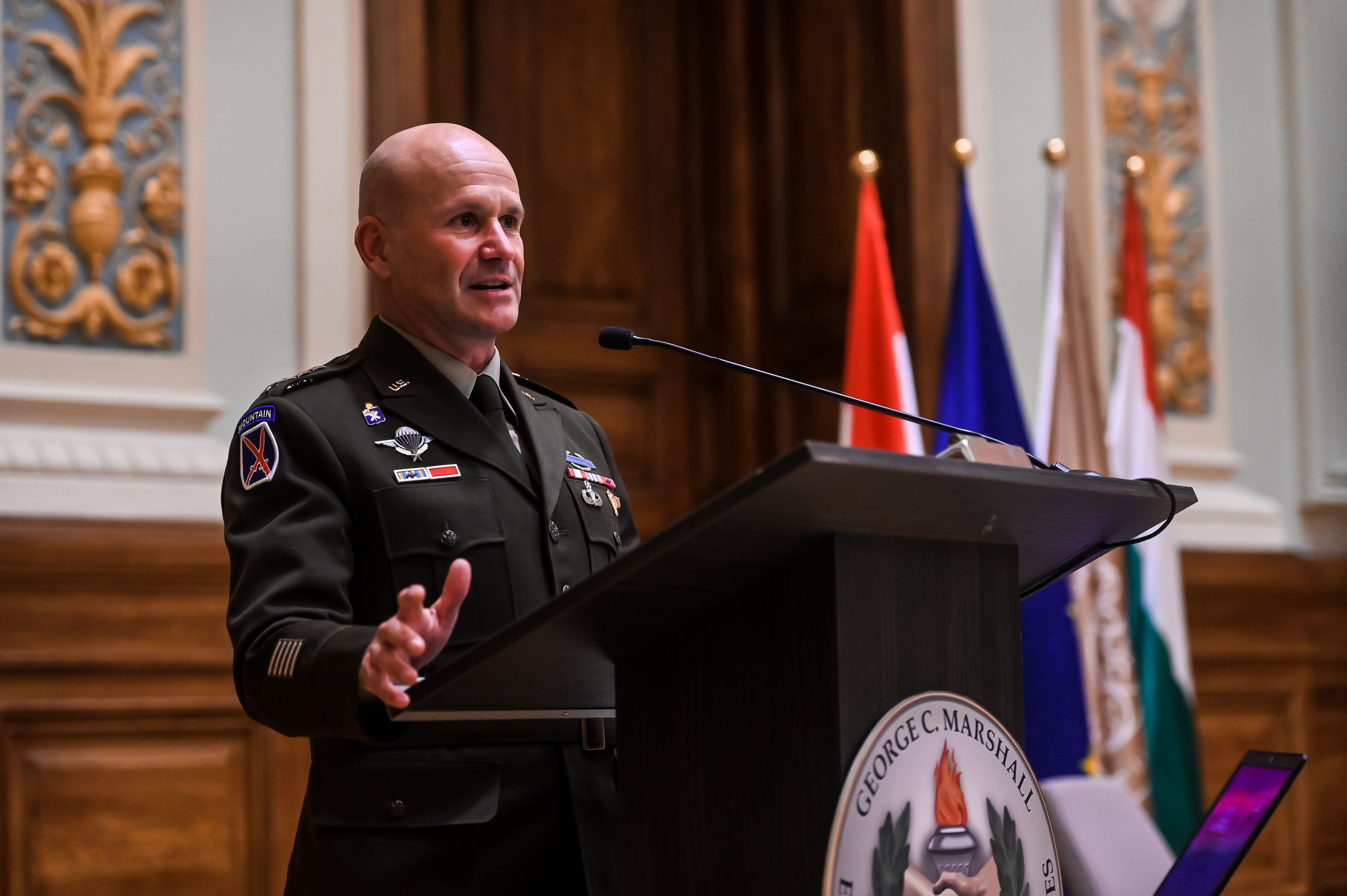 Cavoli pointed to 2014 as an inflection point for evolution of the security environment in Europe, where U.S. Forces in Europe had reached a low point of 22,000 personnel. This led to a collective effort to rebuild capacity, including additional military structures and expeditionary forces, to increase collective defense capabilities. Later, army activities and operations in Africa were added to the U.S. Army in Europe portfolio, in an effort to align operations across both continents and in recognition of interrelated security issues across both regions. Additional efforts to increase collective security and conduct large scale ground operations, including Defender exercises, served to bolster allied preparedness and increase collective defense capabilities, against growing international competitors seeking to gain influence.

Cavoli also pointed to the Marshall Center as an organization that is contributing to a common understanding of security challenges and is bringing disparate views together from across the European/African region.

The event also included a Marshall Center Alumni Programs update and a leadership transfer ceremony of the Hungarian Alumni Association. Ambassador Ferenc Bosenbacher, President of the Association since 2001 and a graduate of the Marshall Center’s very first resident course in 1994 (Executive Program 1994-1), passed the leadership baton of the Association to Csizmazia, a 2018 Alumni Scholar and graduate of European Security Seminar-East 16-3.

Bosenbacher ceremonially handed Csizmazia the original 2001 charter of the Hungarian Alumni Association presented to him by then Marshall Center Director Kennedy, signifying the transfer of responsibility.

Seguin also presented Bosenbacher with a small plaque thanking him for his longstanding commitment to the Marshall Center, as well as his lifelong support of the transatlantic relationship. 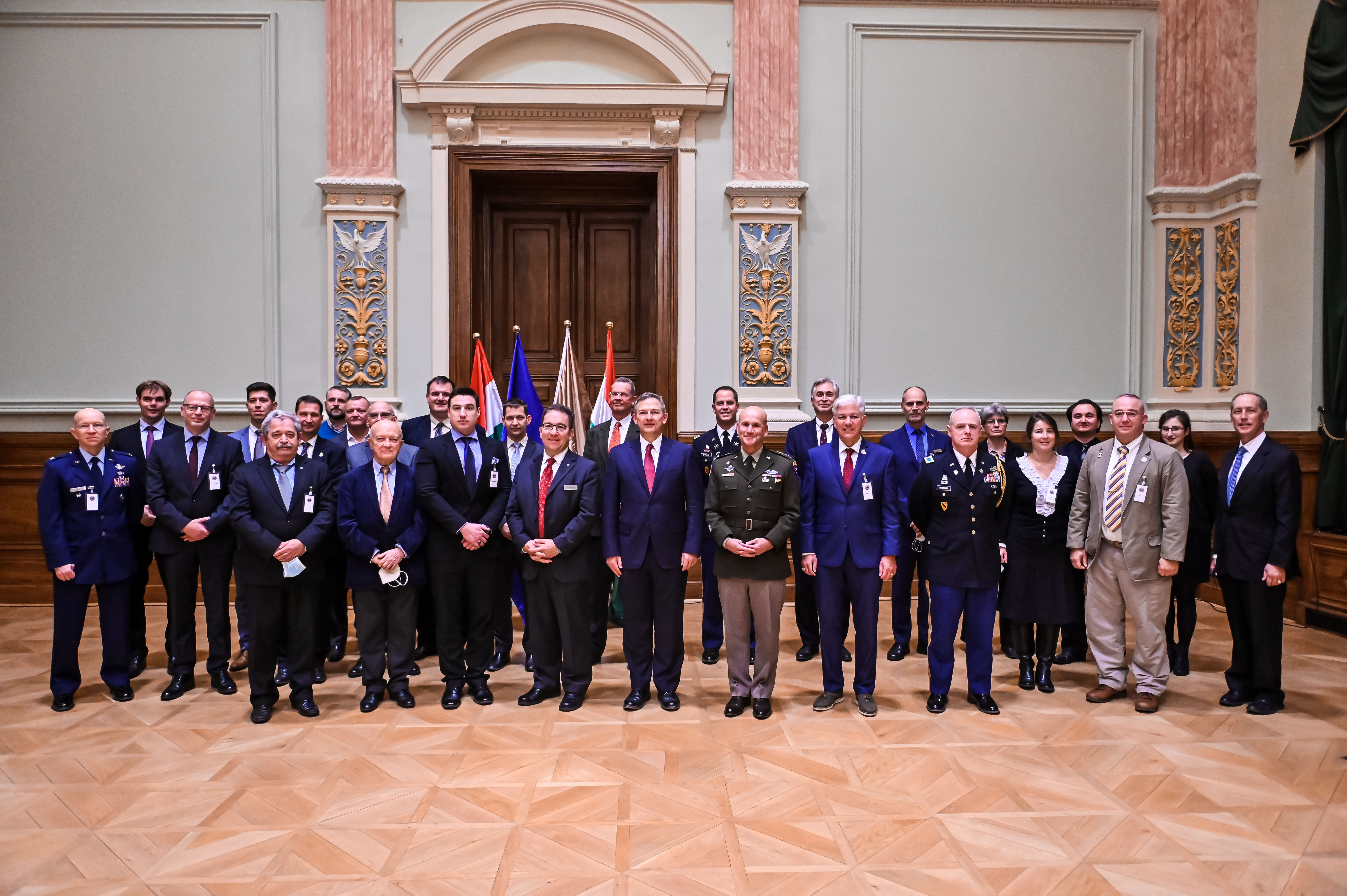 Dénes Szilágyi
Group photo of the Alumni ONE