GARMISCH-PARTENKIRCHEN, Germany (April 30, 2020) – When Anna Gussarova, from the Republic of Kazakhstan, first came to the George C. Marshall European Center for Security Studies in 2013, she didn’t immediately notice the bronze sculpture of its namesake - Soldier and Statesman George C. Marshall.

She notices something new and inspirational about the statue every time she returns to the Marshall Center.

From her first Marshall Center experience as a participant in 2013, she has been back for the Alumni Scholar Program, and several times as an adjunct professor for the Program on Terrorism and Security Studies, and Program on Cyber Security Studies.

“It’s not in the center of the Marshall Center complex that's why I missed it the first time, but I have seen it and admired it many times now,” explained Gussarova.

The Marshall Center will also have a birthday this year. It will turn 27 years old June 5, which is also the date in 1947 of the speech at Harvard University where then Secretary of State Marshall outlined the American proposal. The European Recovery Program, as it was formally known, became branded as the Marshall Plan.

He received the Nobel Prize for Peace in 1953 due to his vision and efforts with the Marshall Plan that rebuilt Europe after WWII. He is the only career officer in the U.S. Army to ever receive this honor.

“Marshall is striding forward, crossing the bridge of cooperation over the river of division and distrust, toward a future of genuine cooperation among nations for the common peace for all,” said the Marshall Center Director retired U.S. Army Lt. Gen. Keith W. Dayton.

“The George C. Marshall statue is a true embodiment of the more than 26 years of cooperation between Germany and the United States that is the Marshall Center,” he added.

“After seeing the statue during my many return trips to the Marshall Center, I first liked how it shows him in a state of moving and keeping going no matter what,” Gussarova said. “It wasn’t until my last time at the Marshall Center, which was the beginning of this year, I thought about his hands being open.”

She explained, “The open hands of General Marshall depicted in the statue symbolizes to me the readiness to cooperate and discuss things, which is what I think is the core idea of the Marshall Center.” 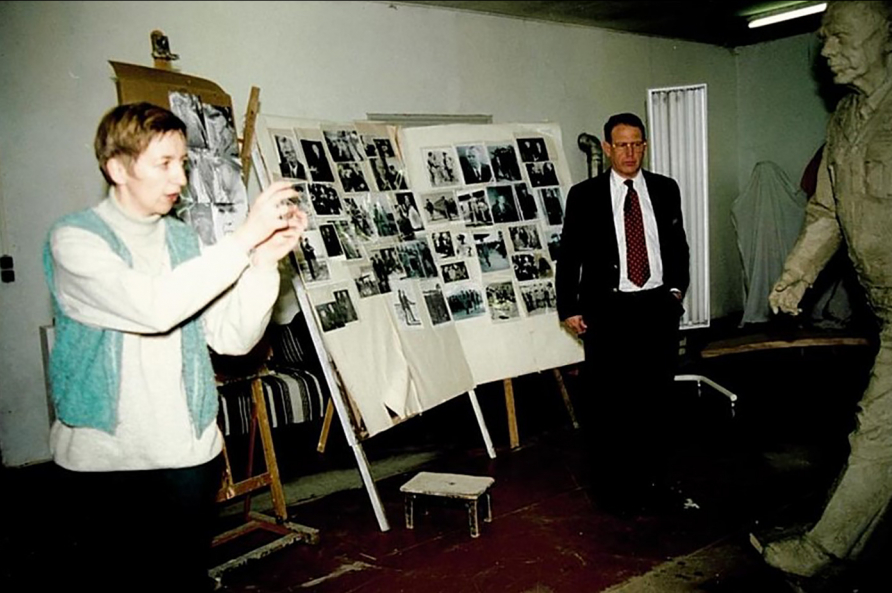 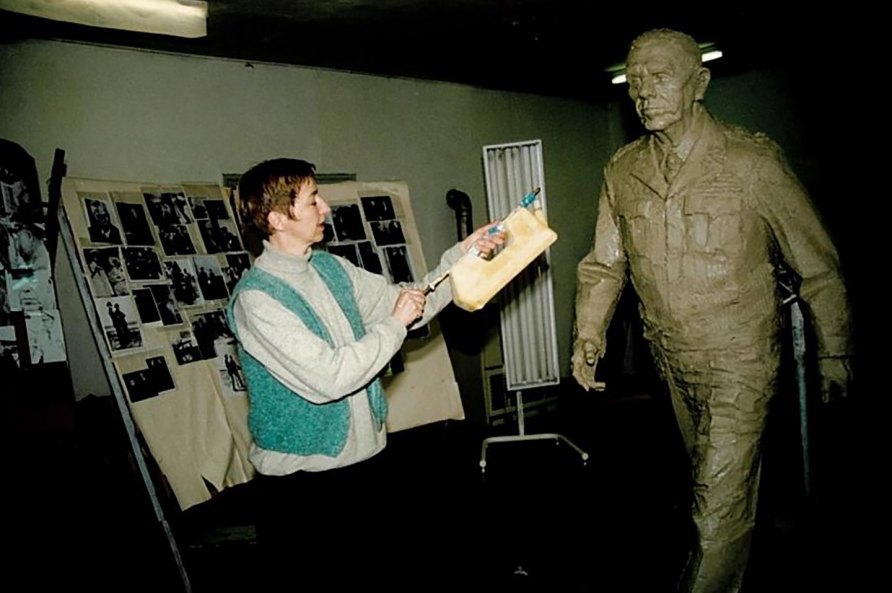 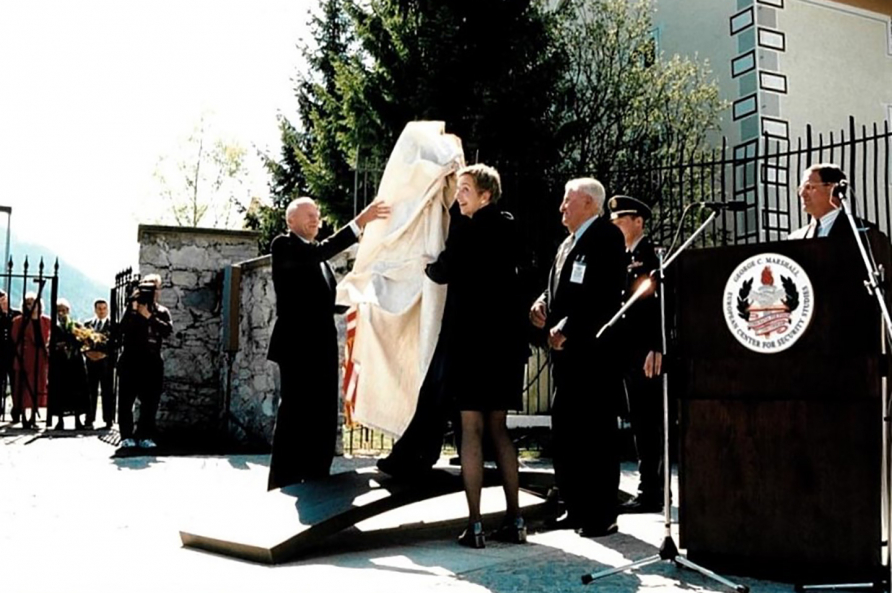 The Bavarian Artist Christiane Horn (1957-2001) of Wartenberg, Germany, sculptured the statue, which was unveiled during a dedication ceremony April 30, 1998 at the Marshall Center.
AP Photo/Diether Endlicher
Image 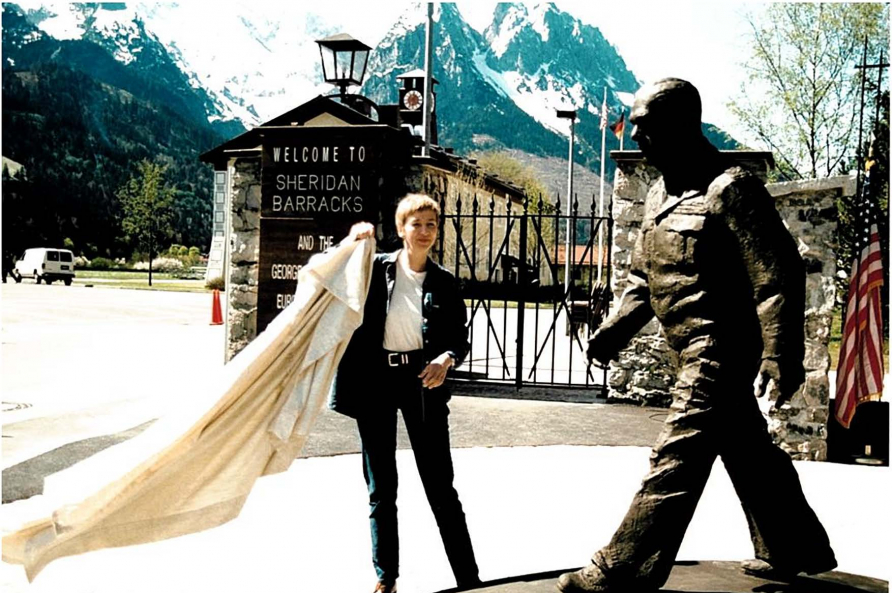 The Bavarian Artist Christiane Horn (1957-2001) of Wartenberg, Germany, sculptured the statue, which was unveiled during a dedication ceremony April 30, 1998 at the Marshall Center.
AP Photo/Diether Endlicher

Retired U.S. Army Lt. Col. Mike O’Neill was at this dedication ceremony 22 years ago. At the time, he was a captain serving as the Marshall Center’s Adjutant.

“The best memory I recall from the statue dedication ceremony was feeling like I was part of a broader world community as a variety of local leaders, dignitaries, and Marshall Center faculty, staff and participants gathered to watch the ceremony,” he said.

“The ceremony left me with a deeper appreciation of General Marshall's desire to facilitate a successful post-war recovery,” O’Neill said.

‘Man is the Measure of all Things’

The first thing that comes to mind regarding the statue for Cypriot National Guard Lt. Col. Savvas Stephanou, physical security officer at the National Guard Headquarters of the Republic of Cyprus, is a statement from Protagoras, (490 BC – 420 BC) a pre-Socratic Greek philosopher.

This statement – “A man is the measure of all things” – created a major controversy during ancient times and is still open for interpretation, but for Stephanou it means “human values” and “inspiration.”

“It means that the individual human being, rather than an unchanging moral law, is the ultimate source of value,” said Stephanou, who is a Marshall Center alumnus, graduating from the Program on Applied Security Studies in 2016. “George Marshall is a man of great merit, who having in mind his life achievements, sets the standard for human values.”

He added, “The statue embodies these values and must be an inspiration to all the Marshall Center participants and alumni, at least it is for me.”