GARMISCH-PARTENKIRCHEN, Germany (March 2, 2017) – More than a half-a-million dollars were seized and several criminals arrested in the first and second stand-alone money-laundering busts in Trinidad and Tobago in November 2016.

This historical bust happened quickly thanks to the friendship bond between Inspector George Laldeo, from Trinidad and Tobago, and Mariano Figueres Olsen, from Costa Rica, forged at the George C. Marshall European Center for Security Studies – a German-American academic partnership located in Garmisch-Partenkirchen, Germany.

Laldeo and Figueres Olsen, met in April 2016 during the Marshall Center’s Program on Countering Transnational Organized Crime or CTOC. This two-week program focuses on the methods practiced by transnational organized crime and terrorist organizations in criminal activities.

Laldeo, who is responsible for the operations at the Transnational Organized Crime Unit in his country, wanted to attend CTOC because he was heading an investigation involving Chinese nationals coming to Trinidad and Tobago in great numbers through legal points of entry.

This investigation had started in November 2015. Laldeo and his team would later discover that these Chinese nationals had what appeared to be legitimate passports from Venezuela and Costa Rica.

“They were establishing businesses in close proximity to each other, which did not make much business sense to us,” said Laldeo, who has been a police officer for 29 years. “We knew something was wrong. It just didn’t add up.”

His investigation got a boost when he attended CTOC because Figueres Olsen was not only in his class, but he was also in his seminar group. The Marshall Center combines lectures with seminars, where participants are broken into groups to discuss more in depth what they learned from lectures presented by subject matter experts.

“Since several of the passports were from Costa Rica, I shared with Mariano all the information I had,” Laldeo said. “He was very fluid and very quick to respond, which supported our investigation tremendously. Even my local immigration authority was amazed at all the information provided and quick response.”

Figueres Olsen was not in Costa Rica at the time, but that didn’t stop him from helping his friend from the Marshall Center.

“I coordinated with our people from the different agencies that George needed,” said Figueres Olsen, who is the director for the National Intelligence Agency and Tactical Unit, and the secretary of the National Security Council, “I told them that this was top priority because George is my brother, and I needed them to stretch out all the way and give him whatever he needed.”

From the information from Costa Rica, George and his team were able to identify safe houses and make history in Trinidad and Tobago, Laldeo said. In November 2016, they arrested several people and seized more than a half-a-million dollars in the first stand-alone, money-laundering bust in Trinidad and Tobago.

This first successful bust quickly led to a second one, he added.

“We were able to identify and find quite a lot of other people based on the information we received from Mariano. I could not have done it without Mariano,” said Laldeo. “He assisted us greatly, and I would say that without Mariano’s contribution, I don’t think we would have be able to make these arrests.

“We may have gotten the money, but some smart lawyer would’ve said, ‘Well, this guy is Costa Rican, send him back.’” Laldeo said, “Because we worked with Mariano and his team in Costa Rica, we were able to make the case and charge them.

He added that the investigation is still ongoing.

Laldeo said that these Chinese nationals who possessed Costa Rican passports had intended to stay for three months, but due to the quick cooperation between the two countries, both arrests happened in the first two weeks of the criminals’ stay in Trinidad and Tobago.

“Because of the relationship we built with George and his team, it’s now public policy in Costa Rica and this government to open up to the Caribbean,” Figueres Olsen said. “This is a big step. Even though, we are geographically close, the daily inter-relationship between the Caribbean and Central America has traditionally been zero – a little tourism maybe, and that’s it.”

He said that there are plans in the works for Costa Rica to develop a permanent embassy-type agency to develop partnerships in the Caribbean.

“We came to realize from working on this operation that even though we have cultural differences, we can build confidence with our Caribbean neighbors, and there are people out there that we can absolutely trust,” said Figueres Olsen, who added that he was able to give an opinion that helped form this public policy reform.

Both men said their friendship that was so essential in this operation and subsequent policy change in Costa Rica was built during CTOC. They are now both members of the Marshall Center’s alumni network of almost 12,000 security professionals from around the world.

One of the presenters at this workshop was Laldeo, who presented on counter threat financing in Trinidad and Tobago, and he did mention these money-laundering cases and how his fellow Marshall Center alumnus greatly assisted with the operation.

“I encourage you to reach out to your fellow alumni if you need assistance, particularly information from another country,” he said to 70 fellow workshop attendees from 43 countries. “I can tell you from personal experience, working together with your fellow alumni saves time and increases the chances that your operations will be successful.”

Half of the workshop participants were from their class, but the other half were from other courses. They said that this workshop helped strengthen and expand their network.

`I think I boasted a lot when I returned from the Marshall Center that I have a person to contact in every part of the world,” Laldeo said. “When Turkey came up as part of an operation, I said ‘don’t worry I have somebody in Turkey.’ When Greece came up, I said, ‘No worries.’”

Figueres Olsen laughed and said, “It happened to me too. My boss told me that he was having a meeting with this person from this country, and maybe, I would want to make contact, and I said, ‘Thanks boss, but I already have a contact who I trust in that country.’”

He added, “Building trust in our business is a matter of life or death. If you trust the wrong guy, you are done – all you think about is your family – so giving trust is not an easy decision. Marshall Center makes it possible for you to establish contacts who you can trust from around the world. That’s vital because we have to work together because the bad guys are working together.” 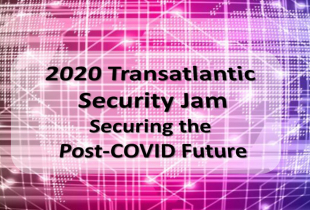