GARMISCH-PARTENKIRCHEN, Germany (Nov. 20, 2019) – Today’s threats are much broader in range than in the past and these challenges are too big for any one country or organization to tackle on its own, said retired U.S. Army Lt. Gen. Keith W. Dayton, the director of the George C. Marshall European Center for Security Studies here.

Dayton was speaking at a graduation ceremony for the Marshall Center’s Program on Applied Security Studies Nov. 20. The Marshall Center is a 26-year-old, German-American security and defense studies institute.

“These ongoing and developing security challenges illustrate that all of us, collectively, have our work cut out for us, but none of us faces today’s trials alone,” Dayton said during his presentation after listing the world events that happened while the 89 participants from 44 countries were at the Marshall Center for the past 10 weeks.

The world events that the director listed included the challenge of the Kurds and Turkish military action, NATO continued to expand its on-the-ground presence in northeast Europe, and the government of the Republic of Moldova fell. He ended his speech with “Take what you have learned here and see how it can be applied to your countries. To the extent possible, be an agent of change – that is why you were sent here.”

Congratulations to our 89 participants from 44 countries on graduating from our Program on Applied Security Studies Nov. 20, 2019.

“We wanted these security-sector practitioners to understand the strategic environment in which their countries and organizations are operating and identify the most significant challenges to regional and international peace, stability and security,”

said U.S. Army Col. Matthew V. Sousa, Marshall Center’s PASS deputy director. “We encouraged them during class to discuss and analyze various approaches for addressing current and emerging threats and challenges, as well as opportunities at the national, regional and international levels.

For the past 10 weeks, these professionals experienced more than 300 hours of academic engagement. They studied the world’s most challenging contemporary security issues and engaged with experts in more than 40 interactive lectures and discussions.

“I deepened my knowledge of security issues and different perspectives of political situations all around the world,” said Oksana Muzhenko, chief of the strategic communication section at the Foreign Intelligence Service in Ukraine. “This course not only met my best expectations in understanding today’s security challenges, but also gave me the opportunity to find new friends from different professions and around the world and learn from their knowledge and experiences.”

These practitioners also investigated security topics such as U.S. and German security and foreign policy, and diplomacy, choosing four from 37 elective topics.

The graduation speaker, U.S. Ambassador to Croatia Robert Kohorst gave them some life advice on how these newest Marshall Center alumni could increase their chances of success in whatever field they are in, whether it is military or civilian or business. He had three main points, which were to be passionate about what they do, be bold and take a risk, and to associate themselves with good people.

“The fact that these security professionals are here from so many countries was fabulous to see them from all over the world, building relationships learning from each other,” he said. “I think as much as anything what these people got from this program are these relationships where they can learn to work together.”

As the Ambassador said this course is set up to build a network of trustworthy international partnerships by encouraging  lifelong friendships among participants from widely varying cultures, backgrounds and countries around the globe, some of which have longstanding tensions with each other.

“It is my hope that spending 10 weeks in an environment of such diversity has prompted you to gain new insights, better appreciate the perspectives of others and perhaps even reconsider long-held positions,” Dayton said.

The 300 hours of academic engagement also included field study trips to the National Socialist Document Center in Munich to understand Germany's past and to Berlin to see the country's rebirth and transformation into one of the most important security actors in Europe. While in Berlin, they visited government agencies and heard from leaders in the Ministry of Defense and German Parliament on Germany's current national security policies.

They spent more than 80 hours in their seminar groups, sharing national perspectives and getting to know each other, not merely as colleagues, but as friends. This energizes and builds trust among the Marshall Center’s alumni network of about 14,000 security professionals from 156 nations.

“I think this program and the Marshall Center is important to helping with today’s security challenges because it explains our values to people around the world,” said Kohorst. “I think that is a huge benefit because the more we can have one-to-one contact with people who hear our story, it is more likely they will understand the importance of our values and hopefully, will adopt them.” 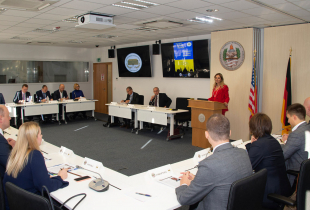