GARMISCH-PARTENKIRCHEN, Germany (Jan. 27, 2017) – For more than two years, the West have been grappling with “hybrid warfare,” which describes and encompasses a variety of shifty means of fighting war.

What exactly is hybrid warfare? What exactly are these shifty means? How does the West combat it and protect its citizens and way of life?

To answer these questions, the George C. Marshall European Center for Security Studies hosted the European Security Seminar-East (ESS-E) to look at “Hybrid Threats and Resilience Building in the Eastern Flank.” Participants from 26 partner nations attended the seminar that took place here Jan. 23 to 27.

“Our aim was to provide a forum to discuss and critically evaluate the changes in the East that have forced us to rethink concepts of security cooperation, economic interdependence, and the continued European and Euro-Atlantic cooperation,” said Dr. Ralf Roloff, Marshall Center’s senior German professor who is the course director for ESS-E and ESS-South, which looks at security threats along Europe’s Southern Flank.

This one-week seminar brought together 61 mid-to-senior-level, military and civilian security practitioners from Europe, Eurasia and North America to address risks, challenges and threats in Eastern Europe, and the repercussions for building resilience in NATO member states and partner countries.

“We had an interesting group of military officers and civilian diplomats, and I think this is a very helpful model for us to come together in a forum like this because our thinking is different,” said Stanislava Bodenbender, from the Office of Defense Cooperation in Prague, Czech Republic. “We have discussions here, and this intersection is very important because you can definitely benefit from this exchange of information between the two groups.”

Roloff added that ESS-E is tailored to meet the specific needs of serving practitioners in secretarial, ambassadorial, legislative and defense security senior-government positions.

“We were joined by a diverse group of subject matter experts with varied backgrounds,” Roloff said. “All our guest speakers have a first-hand experience on hybrid threats in the Eastern Flank.”

Some of the notable speakers were Dr. Géza Andreas von Geyr, director general for Security and Defence Policy with the German Federal Ministry of Defence, and Merle Maigre, security policy adviser to the President of Estonia.

“Together using these platforms of discussions and benefiting from informal exchanges during the course, we built a shared understanding of hybrid threats and the ways and means to address them,” Roloff said.

Participants identified threats and provided policy recommendations in each of the seminars. The last day of this course, participants presented their findings to each other.

“These rough assessment of vulnerabilities will present solid ground to analyze alternative scenarios with the aim to contribute to resilience building societies, united domestic sources with international supporters as necessary,” Roloff said.

These presentations are now being complied and a seminar report will be published in the coming weeks.

This is the second ESS-E for the Marshall Center. Last year’s seminar examined Russian Resurgence in Eastern Europe.

The idea for this type of seminar came from discussions held in Berlin in 2014 with the German Military of Defense, and the joint U.S. and German concern with the dramatically changed security environment in Europe.

“With these seminars, we are going to go one step further than bringing people together to develop a common understanding,” Roloff said. “We are going to develop comprehensive strategies with the participants to address threats, conflicts, vulnerabilities and the disorder in those particular regions.” 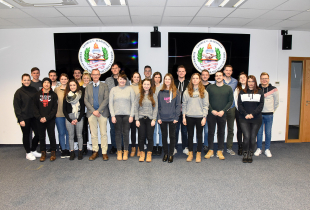