GARMISCH-PARTENKIRCHEN, Germany (April 4, 2016) – For those who speak English as a second language, words like “narcotics,” “illicit,” or “trafficking” may not be as easily understood as “drugs,” “illegal,” or “trading.”

However, the first set of words are used daily and need to be immediately understood during the Countering Transnational Organized Crime resident program at the George C. Marshall European Center for Security Studies.

“We try to mirror the follow-on resident program as much as we can by introducing them to the course-related vocabulary and grammar structures so they will feel more comfortable with the English language and be able to communicate so that others can understand them and they can understand others,” said George Andersen, an ELEC instructor.

“I learned a lot of different words that I had not used before,” said Brazilian army Maj. Gustavo Lima, one of the 15 participants. “I feel that because of this course, I am in a better position to start CTOC.”

The Marshall Center Director U.S. Army Lt. Gen. (Ret). Keith Dayton recently cited PLTCE’s English Language Enhancement Courses as one of the “huge successes” of the Marshall Center in 2015 at an annual meeting with stakeholders.

“To help them prepare for our program, we gave the participants opportunities to hear lectures and engage in discussions with the CTOC faculty,” said Professor Steve Monaco, the CTOC course director.

Monaco said that transnational organized crime is growing in size and influence in a world increasingly marked with globalization and diminishing importance of borders. He added that CTOC examines the major methods by which transnational criminal and terrorist organizations engage in criminal activities.

The final exam for the ELEC participants was held April 1 and was a discussion panel, similar to the ones they will face during CTOC.

The participants had to prepare a three-to-five-minute opening statement about transnational organized crime in their countries. Then, the class was broken up into two groups, with one half giving their opening statement and their other peers asking panel members questions, which Andersen said was vital for the follow-on CTOC course.

The presentations are videotaped, giving the participants a chance to self-criticize and determine how effective they were in communicating complex information.

“In everything we do, we stress the importance of reducing misunderstanding and confusion when communicating,” Andersen said. 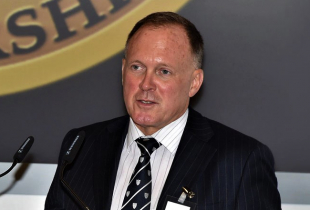