GARMISCH-PARTENKIRCHEN, Germany (May 10, 2019) – Twenty-five war-college level Romanian professionals had the opportunity to meet experts in the field to get an update on the regional security framework during a special seminar held at the George C. Marshall European Center for Security Studies here from May 6 to 10.

This one-week seminar was held for the first time here last year as part of a six-month course taught by Marshall Center alumnus, Romanian Navy Capt. Ioan Craciun, director of security and leadership studies at the National Defense University Carol I of Romania.

“It is always a tremendous value added to the course coming here to the Marshall Center because we have the opportunity to meet the best experts in the field of security,” said Craciun, who attended Marshall Center’s Program for Security, Stability, Transition and Reconstruction in 2009 and the Program on Applied Security Studies in 2012.

Craciun’s course focuses on current national and international security issues and is taught at the Romanian National Defense College, which is a part of the National Defense University Carol I of Romania in Bucharest.

“This is a career course,” Craciun said. “We want to improve their skills in order for them to do a better job. We want to give them a whole, broad understanding of contemporary security.”

He added, “This is why it makes a lot of sense to come to the Marshall Center and run this seminar focused on regional security.”

Craciun brought a team of young researchers to the Marshall Center twice before last year’s pilot seminar. This is when a memorandum was signed between the Marshall Center and NDU Carol I of Romania to host these seminars here as part of Craciun’s curriculum. 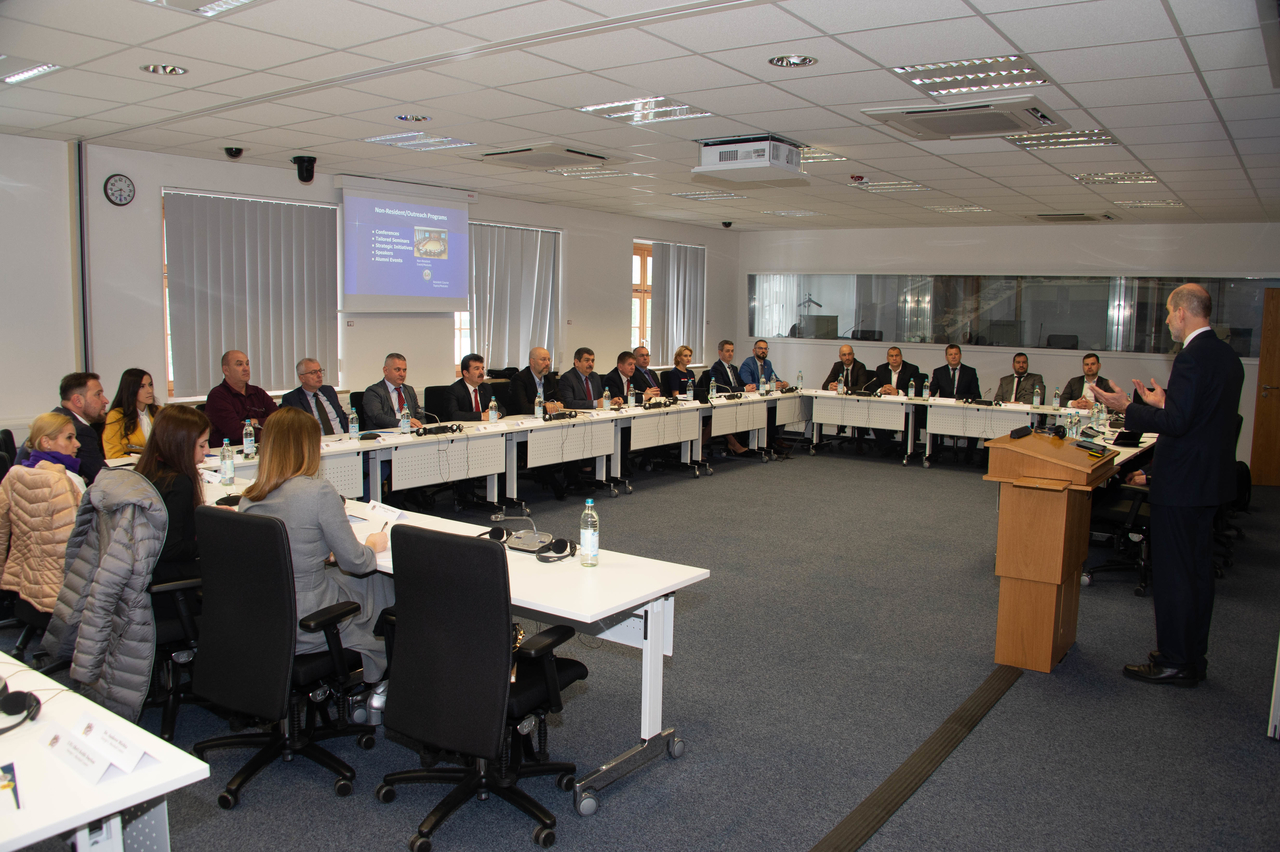 “We hope these security professionals go back to Romania with an even stronger ability to do their jobs and to deal with the very complex security challenges that we are all facing on a day-to-day basis,” Rhodes said. “We also hope they will have a sense that the Marshall Center will remain as a resource for them in the future.”

The course Craciun teaches has three modules. The first module is where the students discuss topics and concepts related to international security. In the second module, they learn about national and international security risks and threats. The third module focuses on strategy and response to the security risks and threats identified in module two. This special seminar on security studies falls into module three, where the students learn about current trends and challenges for global security.

They heard different perspectives of this conflict from Organization for Security and Co-operation in Europe presented by Dr. Claus Neukirch, head of the OSCE Mission to Moldova, and Moldova given by Dr. George Balan, chief of state counsellor, Moldova. They also heard from other subject matter experts on the Russian and Ukrainian perspectives.

“These presentations in SRS were very important for my students, as young to mid-level civil servants, to learn about the conflict in Moldova,” said Craciun, who noted that Romania borders Moldova to the east.

After these sessions, the Romanian students would then hold discussions on the topics covered in SRS. They also conducted research using the Marshall Center Research Library’s databases and participated in a war-room exercise.

To compete their course at NDU, each student has to write a research paper before they graduate in the first week of July, said Craciun.