GARMISCH-PARTENKIRCHEN, GERMANY (Sept. 11, 2015) – U.S Army Col. Joseph King talks about where he was, how he felt and how he and others around him reacted to the terrorist attacks on Sept. 11, 2001, during the 9/11 Remembrance Ceremony held Sept. 11 here at the Garmisch Community Chapel on Sheridan Kaserne.

“For me, 9-11 hurt, and the events that day really did affect the path of my life, my career and really my whole outlook in the years since,” said King, director of the Plans and Strategy Division for the George C. Marshall Center for Security Studies, who was the guest speaker at the remembrance ceremony.

“I saw hundreds of flowers and candles and signs - ‘we are with you’ and ‘God bless you’ – outside the fence of the U.S. military housing area,” said King, who was an arms control inspector stationed at Rhein-Main, Germany in 2001.

“I was deeply moved by the spontaneous compassion of the German people. We take time today to remember the 2,977 people who were killed on Sept. 11, 2001 - 2,977 lives of great promise, cut short in a cruel and savage instant…2,977 mothers, fathers, sons, daughters, brothers, sisters, cousins, wives, husbands, and friends.”

The ceremony also showcased a moment of silence, video tribute and reception.

In closing, King said, “Each one of us became someone different on that day. So I encourage you today to share your story with someone and to listen to theirs.” 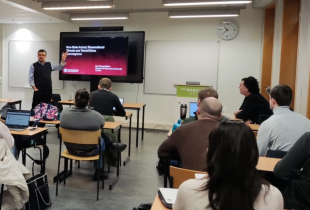 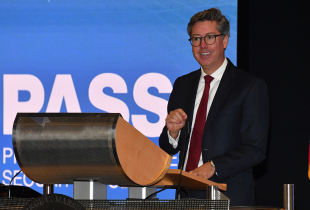 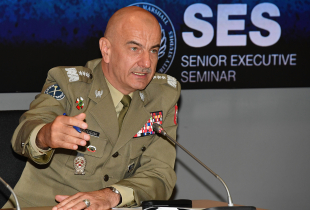