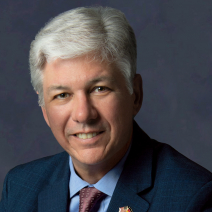 The Marshall Center enjoys an enduring German-American security partnership that has produced generations of global security professionals schooled in American and German security policies and strategic language enhancement. The mission of the Marshall Center is to enable solutions to regional and transnational security challenges through capacity building, access, and a globally connected network.

General Seguin retired from the U.S. Air Force in October 2020 as a major general after more than 31 years of active service.  His last assignment while on active duty was as the Deputy Chief of Staff, Strategic Employment, Supreme Headquarters Allied Powers Europe, Belgium.

He entered active duty in 1989 as a distinguished graduate of the Reserve Officer Training Corps after graduating from the State University of New York at Potsdam.  He went on to hold flying assignments to include duties as flight examiner, instructor pilot, wing chief of safety, and operations officer, with commands at the squadron, group, wing and Air and Space Expeditionary Task Force levels.