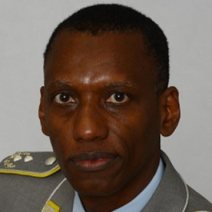 Lt. Col. Dr. habil. Youssouf Diallo joined the George C. Marshall European Center for Security Studies as a military professor in October 2020. He received his master’s degree in development sociology from the University of Strasbourg and a Ph.D. in social anthropology from the École des Hautes Études en Sciences Sociales in Paris. Following that, he became a Lecturer at Bielefeld University, Germany. Dr. Diallo was a Senior Scholar in Max Planck Institute for Social Anthropology’s department of “Conflict and Integration” in Halle/Saale. After his Habilitation at the University of Leipzig in 2004, he had teaching assignments at the University of Leipzig and the University of Gottingen. He was also a Visiting Lecturer at the Institute for Social Anthropology in Zurich.

From 2016 to 2019, Lt. Col Dr. habil. Diallo worked in the Personnel Department of the Federal Ministry of Defence in Bonn where he dealt with questions related to diversity management. He was a member of the Inter-ministerial Working Group “Diversity and Inclusion” of the Federal Government Commissioner for Migration, Refugees and Integration. He was also a Representative of Germany for NATO Science and Technology Organization’s Research Group “Military Diversity: Ethnic Tolerance and Intolerance”.

Before joining the Marshall Center, Lt. Col. Dr. Diallo served as a Liaison Officer in the Political Department of the Federal Foreign Office in Berlin. He was a member of the Sahel Task Force and dealt with institutional and security policy in the Sahel, especially the G5 Sahel Joint Forces.

Among his publications are a number of book chapters, scientific and professional articles on Islam, migration, nationalism, ethnicity, conflict, and security policy in Africa. Dr. Diallo continues research on security challenges in the Sahel.