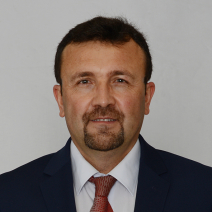 Dr. Cüneyt Gürer joined the Marshall Center in October of 2020 as a Professor of Transnational Security Studies. He also provides academic content and advice to the Program on Countering Transnational Organized Crime (CTOC). In addition, he conducts lectures on transnational security issues, including security issues that are related to Turkey and its extended region.

Before joining the Marshall Center, Dr. Gürer was the Alexander Von Humboldt Foundation fellow at the University of Siegen, Germany where he conducted research on conflict and human displacement and taught a course covering areas of conflict dynamics, human displacement experiences, transnational crime, and refugee integration.

After completing twenty years of service, Dr. Gürer retired from the Turkish National Police in April 2016. Following his retirement, he worked as a senior security consultant for European nongovernmental aid agencies delivering humanitarian support to Syrian refugees in Turkey and provided consultancy to increase the efficiency of support activities on the ground.

During his service in the government, Dr. Gürer coordinated Turkey’s first comprehensive drug strategy and policy document in cooperation with EU institutions. As the head of the national focal point of the European Drug Agency (EMCDDA) in Turkey, he actively supported European-level policy interaction and served as an expert on parliamentary committees on drug-related issues.

In 2020, Dr. Gürer served as the editor of the Security and Defence Quarterly special edition ‘Proxy Forces in Modern Warfare.’ Dr. Gürer is the recipient of numerous awards, including serving as a Eurasia Democratic Security Network Research and Policy Fellow, where he conducted research on political regime changes, democracy, and security. In 2013, Dr. Gürer was awarded with the Second Degree Meritorious Service Medal by the Ministry of Internal Affairs of Georgia for his contributions to increasing law enforcement cooperation between Turkey and Georgia.