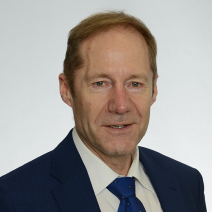 Prior to joining the Marshall Center, Dr. Wigger led the Core Planning Team “Security Network Exercises” at the Federal Department of Defence, Civil Protection and Sport (DDPS) and was the project leader for the “Security Network Exercise 2019” on Terrorism. He headed the Swiss Security Network Office from 2015 to 2021. He also served as a Political Advisor to the Swiss Army Command Staff (2008-2012). Dr. Wigger was the Deputy Chief of the Swiss Armed Forces’ Partnership for Peace program (2001-2007), a member of the Doctrine Department in the Swiss General Staff for the further development of the doctrine of the Swiss Army (2000-2001) and the head of scientific publications at the Army Training Center in Lucerne (1997-1999). He has taught as a research assistant at the Institute of Contemporary History at the University of Fribourg, Switzerland (1993-1996).

Dr. Wigger retired as a Major from the Swiss Armed Forces in 2013, having served as an intelligence officer and company commander.

Dr. Wigger is currently the President of the Lucerne Initiative for Peace and Security (LIPS). In 2021, he was a Swiss Government Fellow at the Global Fellowship Initiative, Geneva Centre for Security Policy. He is fluent in German, English, and French.