“Organized crime can endanger the security of any country, but particularly those with fragile democracies that lack experience effectively managing it. Such crime is a considerable threat to the security of every country in the Balkans, to the region in general and specifically to Kosovo.

Events in the former Yugoslavia in 1990-1999 created great difficulties not only for the new states that emerged, but also for their integration and development. The region is known as an “organized crime haven.” While this epithet may be an exaggeration, the truth is that for the last 20 years, while various industries have failed, the organized crime “industry” has been thriving, working day and night at full capacity.

Since 1999, Kosovo has gone through three phases of institutional transition: the United Nations Mission in Kosovo (UNMIK) period in 1999-2008; the declaration of independence on February 17, 2008; and the arrival of new European Union Rule of Law (EULEX) mission in 2009 that was established to facilitate the integration process with the EU. Nonetheless, the international community still considers the region to be fragile and challenging...”

Lt. Col. Fatos Haziri works for the Kosovo Police, where he has held positions that include director against organized crime and director for strategic planning and legal issues. He lectures on criminology at University College FAMA in Pristina. His research focus is preventing and combating money laundering, terrorism and organized crime. 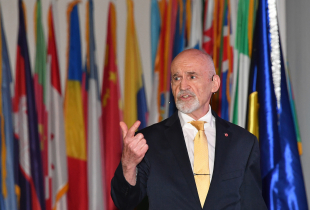