“The Arab Spring has significantly impacted the evolution of border control in Europe. Dissatisfaction with repressive regimes in places such as Egypt, Tunisia, Libya and Syria, as well as a challenging labor market, has inspired a movement of people from the Middle East and North Africa. The exact dimension of this movement has yet to be assessed, as the Arab countries are still subject to the transition process toward democratic regimes and are far from being entirely stable. However, one of the main outcomes of the Arab Spring is connected to the massive influx of migration touching Europe’s external borders. It has led to a progressive strengthening of border control, but has also made an impact at the political level, resulting in a shift in policy in the direction of what was often called “Fortress Europe.”

Taking a first look at the Arab uprisings, one could easily conclude the existence of a so-called “domino effect” that has spread the revolutionary spirit of Tunisia to neighboring countries. However, these social movements have had some common features that go beyond simple imitation, such as high unemployment, influence of social media, low economic levels and oppressive regimes...”

Sandra Dumitrescu spent five years with the International Relations Unit of the Romanian Border Police, dealing with European affairs related issues and acting as a member of the Working Party on Frontiers in the Council of the EU. She is currently working for Frontex as an operational resources officer in the Capacity Building Division. She earned a degree in political science from the University of Bucharest and has completed course work at the Marshall Center. Ms. Dumitrescu is working on her master’s thesis in the field of European affairs. 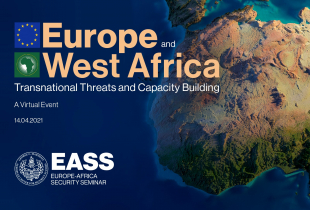