A Battle of Narratives and Identities

“The crisis in Ukraine has taken a toll on Eastern Europe’s future regional security, as well as global security. Not only has it resulted in major changes in international politics, such as the exclusion of Russia from the G8 and a deterioration of Russian-American relations to levels seen at the end of Cold War, but it also has made a significant impact on a wide range of humanitarian and regional security issues. What started as a Ukrainian struggle for regime change has led to a civil war with Russian involvement and the internal displacement of up to 1.2 million people.

While political theorists attempt to identify causes for the crisis in major shifts in the global political landscape, such as the European Union’s and NATO’s continued eastern enlargement, these approaches are often shortsighted and fail to take historical and ideological causes into account. As we look at the underlying conflict lines in eastern Ukraine and different arguments on both the Russian and Ukrainian sides, it becomes clear this conflict can be characterized as a clash of conflicting identities and narratives...”

Excerpt from Tobias Oder, “A Battle of Narratives and Identities,” per Concordiam: Journal of European Security Defense Issues 6 No. 3, 2015: 60-63.

Tobias Oder is an intern for the Seminar on Regional Security at the Marshall Center. He earned a bachelor's degree in political science with a focus on international relations and international conflict management from the Friedrich Schiller University Jena and Louisiana State University. 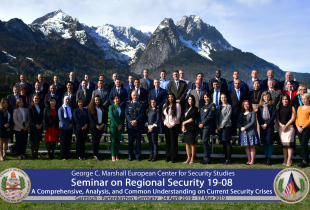