“An increase in violent Islamist extremism can be observed, especially across North Africa and the Middle East. New terrorist groups were born out of conflicts related to the Arab Spring, and previously established groups have merged into larger networks. Some of these new jihadi groups, such as the Islamic State of Iraq and al-Sham (ISIS), are known for their use of extreme violence to pursue their goals and are characterized by a younger membership more inspired to kill than to pray (Watts 2014, 1, 4). Some of these groups even engage in fierce competition with each other. This “new era for jihadism” (Lahoud and al-Ubaydi 2014, 6) means that it is necessary to look at old threats from new angles, such as the use of chemical, biological, radiological and nuclear (CBRN) weapons by terrorist organizations. Has jihadism changed to a degree that contemporary terrorist groups have overcome their “motivational constraints” (Dolnik 2008, 1) for pursuing CBRN related terrorism? A fresh perspective is needed. Previously reluctant jihadist groups could overcome their restraint in using CBRN weapons to gain media attention and prevail in competition with other terrorist organizations...”

Alexander Detert is enrolled in the Marshall Center’s master’s program in international security studies with a counterterrorism concentration. He served in the German Armed Forces in the field of special operations, as an Army aviator and as a U.N. military observer He earned a master’s degree from the University of the German Armed Forces in Munich and is a graduate of both the Marshall Center’s Program on Terrorism Security Studies and Program on Applied Security Studies. 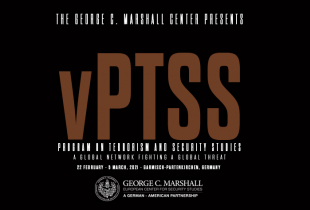