GARMISCH-PARTENKIRCHEN, Germany (Feb. 4, 2016) – The new chief of the National Police of Ukraine needed a first step – a successful one – to tear down decades of corruption within the force under the old Soviet militia.

“You have to have some kind of success in the shortest period possible to attract the public trust and the right people to be dedicated and professional policemen,” said Khatia Dekanoidze, a native of the country of Georgia, who has been the police chief for a little more than a year. “We decided to start at the lowest level with the patrol police.”

“We were in this game to win this game,” said Christopher Smith, director of the Bureau of International Narcotics and Law Enforcement Affairs at the U.S. Embassy in Kiev – a partner for the new chief and her team in police reform of the National Police of Ukraine. “And it worked. Public trust of the new police is up to 81 percent compared to six percent for the old militia. The real story and lessons learned from the new Ukraine police patrol can help other countries fight corruption in their police forces.”

Dekanoidze and Smith were speakers at the first panel discussion of the Global Countering Transnational Organized Crime Alumni Community of Interest Workshop held Feb. 1 to 4 at the George C. Marshall European Center for Security Studies.

One of the major objectives of this workshop, as well as the other COIs that the Marshall Center hosts each year, is to re-engaged with its more than 11,000 global alumni network of professionals countering security threats worldwide and allows the alumni to connect with peers from other countries, said Frank Lewis, a relations specialist with the Marshall Center Alumni Program and the conference planner for this event.

“These events are to build a network of networks. COIs also allow our stakeholders and partners a way to engage with the alumni and elicit their feedback,” Lewis said. “The key for the Marshall Center is to communicate, connect, cooperate and collaborate with our alumni network.”

This COI event is the Marshall Center’s fifth under the Program on Countering Transnational Organized Crime and the second COI workshop since the program transitioned to a global program. Eighty-five percent of the workshop’s participant population were Marshall Center alumni, either from Countering Transnational Organized Crime course (formerly known as Countering Narcotics and Illicit Trafficking), or from other resident programs.

“When she mentioned that they are trying to develop patrol police – to me – that is very important in policy because these policemen are actually in contact with the community,” said Senior Superintendent and Executive Officer Benjamin Lusad, from the Directorate for Operations with the Philippine National Police, talking about Dekanoidze’s presentation. “We get to entice the community to also work with us in the same manner that we try to raise our creditability as police officers in that community.

“The main issue is creditability,” stressed Lusad, who is a Marshall Center alumnus. “We have to raise the creditability of police officers to encourage the community to get onboard with the direction that the country is going.”

This workshop – “Examining Anti-Corruption Policies, Measures and Solutions” – is a forum to examine the global scourge of corruption and review effective national, regional and international anti-corruption approaches, measures, programs and policies, said Professor Steve Monaco, CTOC program director and moderator for this workshop.

“Crime absolutely relies on corruption to flourish and do its business,” Monaco said. “Our participants seem to be particularly interested in corruption from the perspective of political will.

“Corruption has become a national obstacle, and my country is not an exception,” said Ghanaian armed forces Squadron Leader Mark Adelibam, a Marshall Center alumnus since 2011, who is currently the assistant air strategic officer with the Defense Intelligence, and who found the workshop informative. “I have learned how public officials may try to hide their corrupt behavior under regulations. I am taking many techniques I learned here back home with me.”

Dr. Oliver Landwehr, crime prevention and criminal justice officer with the Corruption and Economic Crime Branch of the United Nations Office on Drugs and Crime, presented the 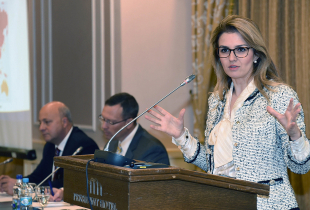