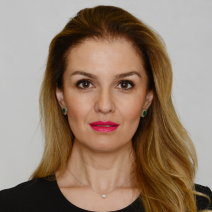 Dr. Valbona Zeneli joined the Marshall Center in August 2011 as a Professor of National Security Studies. She also serves as the Chair of Strategic Engagements in the Department of Strategic Security Studies. Her portfolio covers the Ukraine Defense Reform Program, the Senior Leaders’ Program for capacity building for parliamentarians, and the Loisach Group. Dr. Zeneli is also a non-resident Europe’s Future Fellow at the Institute for Human Sciences (IWM) in Vienna, focusing her research on Chinese influence in the Balkans.

Dr. Zeneli has published numerous academic papers, book chapters, and policy papers and is a frequent contributor to international magazines. She has delivered more than 100 presentations in more than 30 countries, and is a frequent lecturer at the NATO School, the U.S. Foreign Service Institute, and several defense academies across Europe. She is part of the Transatlantic Leadership Network’s NATO Task Force, comprised of European and North American diplomats, military experts, and security analysts with significant experience in NATO affairs. She has completed several Executive Education programs at Harvard Kennedy School of Government. In 2019, Dr. Zeneli received a Certificate of Appreciation from Georgetown University for over 10 years of collaboration in research and publication.