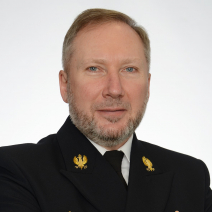 Rear Admiral Piotr Nieć joined the Marshall Center as a Visiting Professor in October 2022. Previously, he was the Chief of Armament Directorate within the Inspectorate of the Navy in the General Command, Polish Armed Forces. He commenced his military career onboard the Foxtrot class diesel submarine. Afterwards, he was assigned to the first Polish crew of ORP Gen. K. Pulaski (former FFG-11, Olivier Hazard Perry frigate). From that time, his naval service was related to the surface community. His major command positions include command of ORP Gen. K. Pulaski frigate, the Combat Ships Squadron, and the 8th Coastal Defense Flotilla. RDML Nieć served within the Standing NATO Maritime Group One (SNMG1) twice, as a Commanding Officer of the abovementioned frigate and also as a Chief of Staff. While in those assignments, he took part in the Operation OCEAN SHIELD and the Operation ACTIVE ENDEAVOUR.

During shore duty, he also served in positions dealing with operational capabilities of the navy and the armed forces.

RDML Nieć graduated from the Polish Naval Academy, the United States Naval Academy, Annapolis, MD, and the Naval Command College in Newport, RI. He was promoted to the rank of Rear Admiral (NATO OF-6) on 15 August 2019.