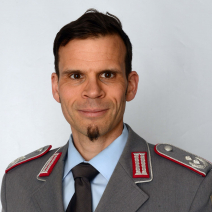 Lieutenant Colonel Falk Tettweiler joined the Marshall Center in April 2019. He serves in the Research and Policy Analysis Department, working on topics of special interest to the German and U.S. Defense Ministries. He also serves as co-chair in the Emerging Security Challenges Working Group of the Partnership for Peace Consortium.

Before joining the Research and Policy Analysis Department, Lieutenant Colonel Tettweiler served as Deputy Director of the Marshall Center’s Plans and Strategy Directorate. During his military career, Lieutenant Colonel Tettweiler has held several positions in the Federal Ministry of Defense, was counselor for Security Policy at the Federal Academy for Security Policy in Berlin, and served as Military Fellow at the German Institute for International and Security Affairs (SWP). He has served on Active Duty in the German Army since July 1994.