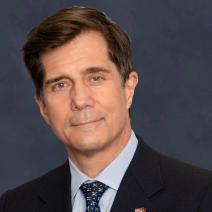 Eric Nelson assumed duties as the Associate Director of the George C. Marshall European Center for Security Studies in Garmisch-Partenkirchen, Germany, in February 2022. As an Ambassador-in-Residence, Eric contributes a Department of State perspective to the Marshall Center’s mission to Educate, Engage and Empower security partners and leaders to collectively affect regional, transnational, and global challenges. The Marshall Center enjoys an enduring German-American security partnership that has produced generations of global security professionals schooled in American and German security policies and strategic language enhancement.

Eric previously served as Director of the Office of eDiplomacy in the Bureau of Information Resources Management, Deputy Chief of Mission in Costa Rica and Consul General in Munich. Since joining the Foreign Service in 1990, he has also served overseas in Islamabad, Milan, Mexico City, Frankfurt and Santo Domingo, and in Washington in the Bureau of Administration. During his career tenure, he has received numerous awards for effective leadership, innovation and public diplomacy. In 2014, he was selected by Fedscoop magazine as one of fourteen visionary leaders in federal information technology.

Eric began his career in public service as a Peace Corps Volunteer in Liberia. In 2013-2014, Eric was a fellow in Seminar XXI of the Center for International Studies of the Massachusetts Institute of Technology. He holds a Bachelor of Science degree in Chemical Engineering from Rice University and a Master of Business Administration degree from the University of Texas at Austin. Eric is fluent in Italian, Spanish and German.