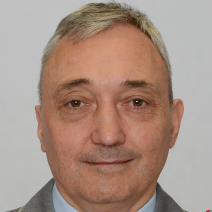 Colonel Dr. Frank Hagemann joined the George C. Marshall European Center for Security Studies (GCMC) in March 2022. He is the Commander of the German Element of the GCMC (Senior National Representative) and serves as the Research and Policy Analysis Department Head.

Prior to joining the Marshall Center, Colonel Dr. Hagemann served as the Head of the Education Department at the Bundeswehr Center for Military History and Social Science in Potsdam.

Colonel Dr. Hagemann is a graduate of the German Armed Forces General Staff (GS) International Course in Hamburg and has held various leadership, staff and academic positions in the German Armed Forces, including a deployment as company commander in Kosovo (KFOR). He has, among other positions, been Assistant Military Representative to the Military Committees in Brussels, where he gained in-depth experience with regard to the military-political environment of the EU and NATO. Colonel Dr. Hagemann has also had two assignments to the German Ministry of Defense in Bonn and Berlin.