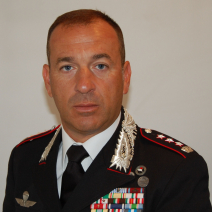 Colonel Claudio Cappello attended the Nunziatella Army Military School from 1983 to 1986, after which, as a Carabinieri cadet, he attended the Military Academy of Modena from 1987 to 1989. In 1991, he graduated from the Carabinieri  Officer School in Rome, where he read law.

At the end of 1991, First Lieutenant Cappello reported for duty at the 1st   Carabinieri Parachutists Battalion Tuscania in Livorno, Italy, where he served first as a platoon leader and later as a company commander. In 1995, Cappello was promoted to captain and appointed to the territorial organization in Alba, Cuneo as commander of the local Carabinieri company, dealing with law enforcement, before attending the staff course at the Carabinieri  Officer School in Rome in 2000.

In 2001, Cappello was promoted to major and appointed to serve as commander of the Carabinieri Cacciatori (Hunters) Heliborne Squadron “Sardinia” in Abbasanta, Oristano, a unit specializing in fighting banditry and locating kidnapped. During this time, he earned a bachelor’s degree in security sciences.

Three years later, Col. Cappello moved back to the Carabinieri  Paratrooper Regiment as Commander of the Training Centre (Battalion-Size). During this time, he earned a master’s degree in internal and external security sciences and attended many international training courses, including:

In September 2016, Col. Cappello returned to the territorial organization as Carabinieri Provincial Commander for the province of Varese, where he has spent the last four years working once again with law enforcement.

Col. Cappello has taken part in different national and international training activities (in France, Estonia, and Israel), and more recently was involved as a mentor in the U.S. Minister of Defence Advisor (MoDA) Program carried out in Indiana.

He has qualified for Italian, French, and U.S. paratrooper wings (both static line and free fall) and has been awarded several qualification badges and ribbons, such as patrol leader, pathfinder and bodyguard course, scout, military police, and military driving instructor.