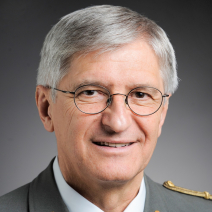 Before joining the Marshall Center, Colonel Rozenits worked as an expert in the Austrian Ministry of Defense on EU security and defense policy and EU-NATO cooperation. He served as the Austrian representative at the European Defense Agency and at the NATO headquarters of the Conference of National Armaments Directors (2013-2017).

In 2007 and 2008, Colonel Rozenits was on duty in Bosnia and Hercegovina at the EUFOR ALTHEA headquarters, responsible for freedom of movement, storage of weapons, and ammunition and mine clearance.

As an Austrian general staff officer, Colonel Rozenits has been with the Austrian Ministry of Defense for 45 years, as deputy director of the Austrian NCO Academy and in all federal states in functions such as G3, chief of staff, deputy commander and in 2000 as military commander of Upper Austria. He previously served as a platoon commander, company commander, and staff officer at battalion and brigade level.

Colonel Rozenits is also a trained technician and journalist and has been director of the Austrian Peace Academy, an Austrian NGO, for almost 20 years. For ten years, he was President of the 40,000 Upper Austrian Veterans Association.

Colonel Rozenits was recognized by the Croatian community for his master’s thesis on “Minority Policy in Burgenland from 1921 to 1991” at the University of Vienna in 1994.