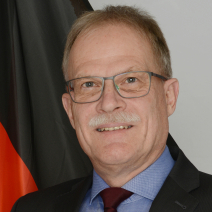 In this function, he was the highest Military Representative of German Forces in Bavaria.

After joining the Bundeswehr in 1976, he completed his Air Force officer training with stations in Germany (Munich, Freising, Lenggries and Erding) and the United States of America (El Paso).

General Dotzler finished his studies at the Bundeswehr Academy with a diploma in Business Administration.

Following assignments as squadron commander and participation in the 36th Air Force general staff course, he went through numerous appointments as general staff officer at the Federal Ministry of Defense (FMoD), the Air Force Office, the Air Force Support Command and worked as military assistant to the Chief of the German Air Force.

He was commander of the Air Force service regiment 8 and Joint Logistics Services logistic regiment 46, before he was appointed branch head at the FMoD Air Staff, acting director and project manager at the NATO Supreme Headquarters Allied Powers in Mons, Belgium and chief of cabinet to Parliamentarian State Secretary Christian Schmidt in Berlin.