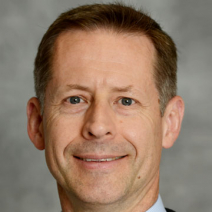 Dieter Bareihs serves as the U.S. Deputy Director of the George C. Marshall European Center for Security Studies in Garmisch- Partenkirchen, Germany. As the deputy director, Brig Gen (ret) Bareihs guides and coordinates operational elements of the Marshall Center, formulates plans and programs for its administration and operation, and coordinates and develops stakeholder support and resourcing to meet programs and objectives. He assumed duties as deputy director in September 2018.

Brig Gen (ret) Bareihs received his commission in 1989 and graduated as a distinguished graduate from the United States Air Force Academy. He is a graduate of the U.S. Air Force Weapons Instructor Course and is a command pilot with over 3,000 flight hours in various aircraft. His major military awards and decorations include: the Distinguished Service Medal; Defense Superior Service Medal with oak leaf cluster; Legion of Merit; and Bronze Star.

In addition to holding a Bachelor of Science in Aeronautical Engineering from the AF Academy, he holds three advanced degrees: Master of Engineering Management from the University of Colorado; Master of Military Operational Art and Science from Air Command and Staff College; and Master of Science in National Resource Strategy from the Industrial College of the Armed Forces.